Jockeys are in a funny position when it comes to the world of horse racing because whilst they may sometimes appear to be the most important actor in the sport, they are often playing second – or even third – fiddle to the horse itself and the trainer. Sometimes even the horse’s owners get more of the limelight than the person actually steering the horse towards the finish line.

In terms of financials, the jockeys do at least get more than the horses, who can perhaps hope for an extra sugar cube or a Polo if they land connections six-figure wins. However, whilst they are more handsomely remunerated than their four-legged colleagues, it is the owners who scoop most of the big prize fund, with the trainers also seeing a good chunk of cash. But what do the jockeys get paid? It may well surprise some just how badly paid jockeys are but let’s take a closer look.

How Much Do Jockeys Earn? 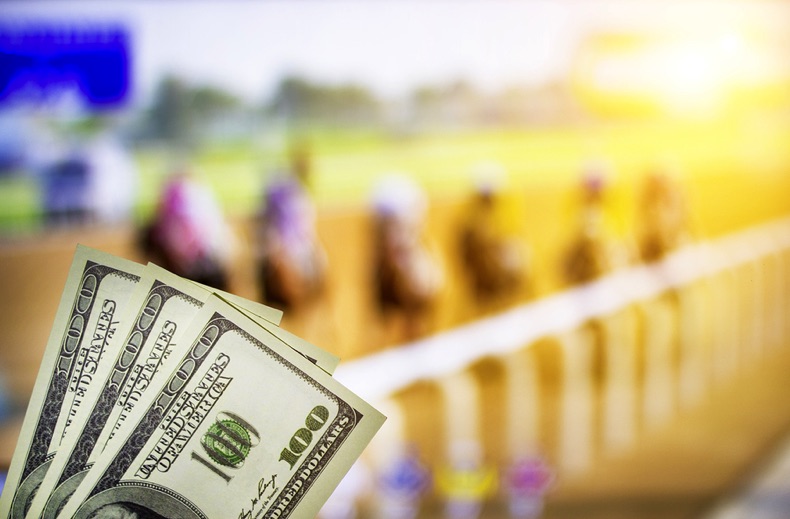 Many people might see jockeys on TV or landing big races and assume that it is a very well paid job. We regularly hear about the huge wages footballers earn and the astronomical pay cheques stars in golf, tennis, boxing and F1 receive. Given the richest horse race in the world was worth a very cool $10m to winning connections in 2020, with a further $10m split between the field, it would be an obvious step to make the assumption that jockeys are also very well paid.

However, whilst Lionel Messi may earn a reported £62m per year (that’s £5m per month, £1.19m per week or, if you prefer more than £7,000 per hour), there are lots and lots of professional footballers earning far less. The average wage in League Two football is thought to be around £1,000 per week. Whilst most of us would gladly play a sport we love for £52,000, that’s clearly a far cry from Messi money.

And of course we see the same pattern in almost every sport. For every Floyd Mayweather and his fleet of luxury cars and private jet there is a journeyman pro getting put on his backside on a regular basis for little more than training expenses.

Whilst Rory McIlroy might be able to earn tens of millions of dollars from what he describes in his Twitter bio as, “I hit a little white ball around a field sometimes”, those in the lower echelons of golf’s minor tours are probably losing money paying their own plane fares and hotel costs to compete for relatively tiny purses.

So when we ask the question, how much does a jockey get paid, the answer “how long is a piece of string?” isn’t a bad one, although a more telling one would be, “which jockey?” Whilst those at the top of the sport make a very good wage, many racing fans might be surprised just how little some of the lesser jockeys receive.

Most Jockeys Are Self-Employed

The first thing to note about jockeys and their earnings is that most people who ride racehorses professionally are classed as self-employed. Some of the better jockeys will have contracts with owners or trainers to ride exclusively for them, receiving a retainer for doing so. However, the vast majority are effectively freelancers, selling their services on a per ride basis.

The starting fees are fixed, with a National Hunt jockey receiving £164.74 for every horse they ride, whilst the fee on the flat is lower at £120.66. With meetings in the UK taking place virtually every day of the year and each usually having six, seven or even eight races on the card, on the face of it jockey earnings can be quite high.

A jumps jockey booked for a full seven-race card will earn over £1,100, which seems pretty good for an afternoon’s horse riding. If a really dedicated jockey wants to work virtually every day of the year it might seem that their earnings potential is really high. However, the reality is rather different.

Whilst the big names that get the best rides at Cheltenham, Royal Ascot and the other big meetings in either jumps or flat racing, for the rest the average pay is far, far lower. In general flat jockeys tend to have more rides on average which is partly why they are paid less. It is estimated, based on the average number of rides a jockey gets in either form of the sport, that a typical NH rider will earn just £26,500 in fees, with flat campaigners a whisker better off, taking home £27,150.

The 2019 Annual Survey for Hours and Earnings (ASHE) reported that average (median) UK earnings were £30,420, so clearly riding horses is not for those wanting to get rich.

Those figures are based on a jockey having between 215 and 300 rides a year but it should be remembered that the more successful jockeys will have many more rides. Well regarded jockeys might get the mount 600, 700 or even more times, although of course their numbers are limited somewhat by the seasons of their chosen discipline (flat or jumps).

Whilst the chance to earn over £1,000 a day certainly exists for many jockeys, they do not take home all of that £164.74 (NH) or £120.66 (flat) they receive for every ride. Of course, like the rest of us they pay tax; but even before the tax man comes into the equation the typical jockey will lose 10% to their agent, 3% to the Professional Jockeys Association, and between 10% and 5% (on a sliding scale) to their valet for handling their equipment.

On top of that they pay out for on-course physios, insurance and banking fees to Weatherbys, the racing bank that deals with the riding fees. Essentially around 25% of their fee is gone automatically and that’s before we even consider the huge travelling that jockeys undertake and the associated expenses.

Whilst the big guns of the game may occasionally have the use of an owner’s helicopter or private jet, the average jockey is far more accustomed to the back seat of a car and long hours spent on the motorway. That’s if they are lucky. There is every chance they will be doing all of the driving themselves and according to Great British Racing the average jumps jockey will do around 70,000 miles a year, 10 times the national average.

Petrol isn’t cheap and so that’s clearly a huge expense for a rider, as is maintenance for a vehicle doing such substantial mileage. Clearly, then, the notion that riding horses is a good way to get rich is hard to maintain. However, aside from their base fees and a love of the sport, there are other reasons jockeys choose to put their bodies on the line and sit seven feet in the air on board an animal that can reach over 40 miles per hour.

The simplest way for a jockey to improve their pay is through delivering the goods on the track. The money involved in flat racing is bigger but there are often substantial sums available to NH jockeys too. Jockeys receive a percentage of any prize money received by the owners for horses they guide to victory or to a place.

They earn 3.5% of place prize money and 8.5% (NH) or 6.9% (flat) for their winners. Once again the agent will take their 10% or another agreed amount but thankfully for the jockey there are no other deductions (other than, of course, tax).

Any jockey landing a big race will see a decent payday, with, for example, the Epsom Derby serving up a cool £921,538 to the winning owner in 2019. That is the richest race in the UK in fairness, but that does mean that Seamie Heffernan will have landed well in excess of £55,000 (after agent fees) when he guided Anthony Van Dyck to victory that year.

Whilst no other race can match that sum, there are lots and lots of contests that deliver six-figure prizes and Davy Russel will have landed around £50,000 (again, after fees) for his 2019 Grand National defence aboard Tiger Roll.

As with just about every sport there are further opportunities for protagonists to boost their earnings. Sponsorship is one such option and jockeys will typically have a number of deals, although obviously lesser riders who participate in the smaller races, aboard horses with little chance of winning, will earn considerably less than the big names that get the most media attention.

Similarly public speaking and ambassadorial work is an option, but once again one that will tend to offer the biggest rewards to the jockeys who are already earning the most through the number of rides they can get and the prize money that their superior horses and skills can deliver.

So, What Do Jockeys Get Paid? 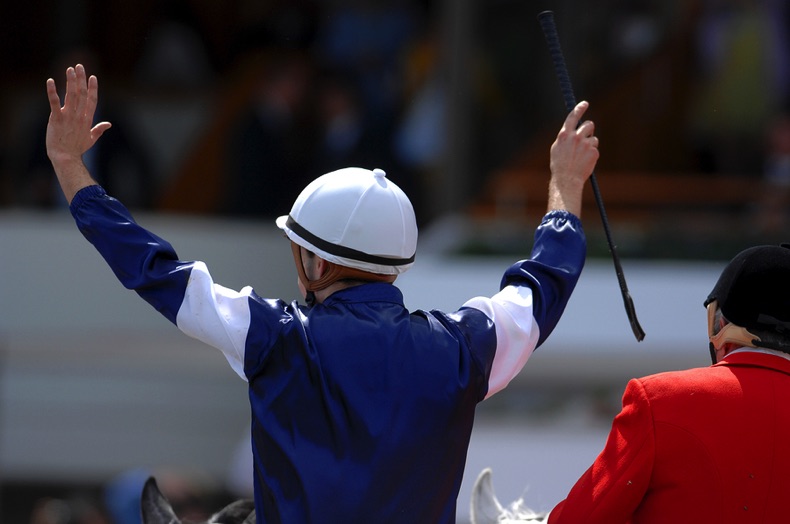 Hopefully we have helped you better understand how much jockeys earn and how that pay might be made up. To give you a clearer idea, let us take a look at three hypothetical jockeys and see how their pay might break down, excluding any further earnings they might make through sponsorship and similar promotional work.

A top, elite level flat rider who typically gets big rides in the key races such as the Classics might earn:

At a slightly lower level you might have a well-known jumps jockey whose best days are behind them but can still land the odd big winner and takes a lot of rides. Such a jockey might see an earnings breakdown as follows:

Dropping down the jockey hierarchy further we might reach a young flat rider just trying to make their name. They must work hard to get any sort of mount, let alone something in with a real chance of landing a big payday.

Now, there are a small number of jockeys earning much more than our top example and others probably earning less than our lowest hypothetical rider. Apprentice and conditional jockeys earn even less but of course that is the way in most industries. As in most walks of life, the difference between the earnings of those at the top of their game and those struggling, or just starting out, can be huge.

But if you want just a simple answer with regards how much a jockey earns, taking a figure of around £30,000-£50,000 covers a good number of today’s riders.