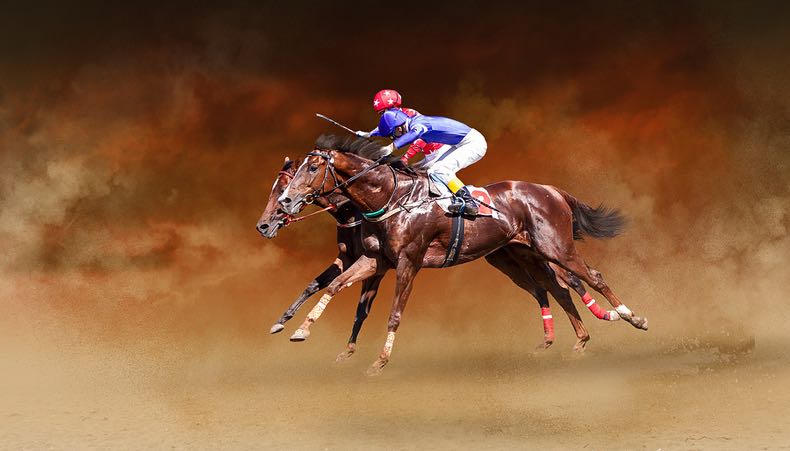 Watching a thoroughbred horse in full flow is a thing of beauty and one can only imagine the exhilaration and adrenaline a jockey must feel. When sitting aboard roughly a tonne of muscle that evolution and the best efforts of humanity have bred solely for speed, jockeys must experience an incredible thrill riding the best horses in the world at high speeds.

But just how fast do racehorses go? We’ve waded through the data, and through the record books, then taken a long hard look at the history books (it’s been a busy day) and we’ve got some interesting answers. Not only will we look at the fastest racehorses, but we’ll also see how that compares to other animals, including one of the fastest of them all, the swiftest human ever, Usain Bolt! 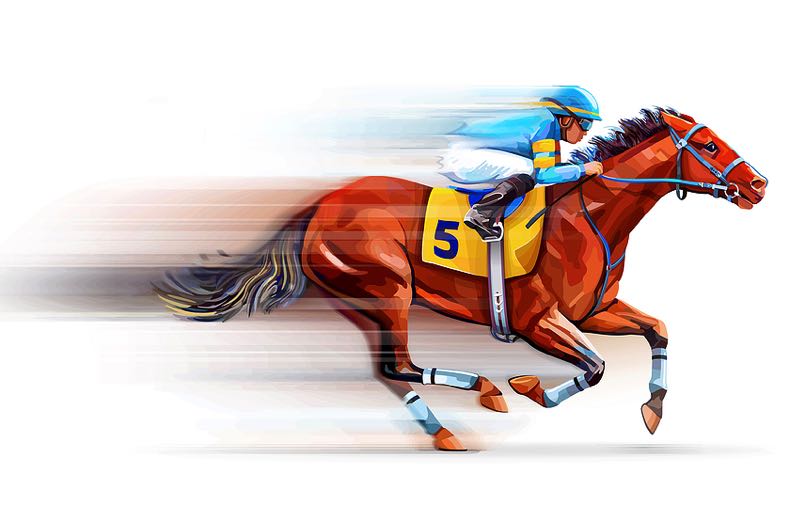 If we are talking records then there is one obvious place to start and that is with a rather well known Irish brewer and a certain book they keep (or at least used to). Now, when we wonder how fast horses are and what was the fastest ever, there are of course different ways of assessing this. The chief issue is over what distance and Guinness World Records (they dropped the “book” in 1999 apparently!) list a couple of options.

Although the publishers of the records are no longer connected with Guinness, rather conveniently and fittingly, the fastest speed for a race horse is listed as Winning Brew! Guinness World Records state that “The highest race speed recorded over two furlongs is 70.76 km/h (43.97 mph)” and that this feat was registered on the 14th May 2008.

So, in short, the fastest racehorse ever over two furlongs was Winning Brew, registering a rather impressive speed of almost 44mph. That means that Winning Brew, and many other similarly speedy horses cannot be ridden full pelt on the vast majority of roads in the UK’s towns and cities. Cantering only, please.

As said though, the speed of the “fastest horse” will depend on the distance over which we measure their performance. The table below shows some of the best times and approximate speeds (the distances are approximate) achieved by the fastest horses in a range of major races from the UK. Whilst perhaps not entirely fair, we’ve thrown in a few of the most famous British National Hunt races too!

Perhaps the table above actually most highlights the incredible feats achieved by the best of the best in the NH sphere. Whilst the average speeds for the fastest horses in the Grand National and Gold Cup are still some way shy of the flat sprinters, to maintain a speed of almost 30 miles per hour for more than four miles, whilst handling 30 huge obstacles along the way too, is clearly an incredible feat.

Ultimately though, horse racing is about winning races, not setting records for top speeds. The fastest speeds achieved by horses are thought to be much higher but the speeds typically used are only averages. Such speeds are based on the time taken to complete a set distance but as anyone who watches racing knows, one of the best sights in the sport, and in betting, is seeing the horse you have backed produce an incredible turn of foot to put their rivals to the sword and surge to the line.

Whilst most accept Guinness’s “fastest horse” title as rightfully sitting with Winning Brew at 44mph, many racing experts believe that lots of thoroughbreds can sustain much higher speeds over shorter distances. So, for example, it is thought that at the line, fast-finishing sorts will easily reach 47mph or even faster. However, this is simply not something that is widely measured, if at all.

One firm piece of information we can go on, however, concerns one of the current crop of racing’s top speedsters. The brilliant Battaash has won four King George Stakes in a row at Goodwood and although his time in 2020 was the fastest (he completed the 1006 meters in just 55.62 seconds), in 2019, he hit speeds of almost 50mph. Claiming his hat-trick in this contest, the brilliant Irish bay was clocked at 48.63mph near the start of the race. Indeed his average speed for each of the first three furlongs was over 48mph, before he dropped off considerably for the last two.

Thus far we have focussed on thoroughbreds only, this being the type of horse that is almost exclusively used in what most people understand by the term “horseracing”. The thoroughbred breed was created and developed using selective breeding in the 17th and 18th centuries.

This process created a fast, agile horse that is spirited yet suitable for training and has enough stamina to run the sorts of distances that have historically been raced. However, whilst all the records we have for “the fastest horse” concern this particular breed, the line of which can be traced back to just three foundation stallions, it may surprise many to learn that the much-admired thoroughbred is not actually the fastest horse!

The quarter horse, sometimes called the American quarter horse, takes the title. At least it does if we assume out and out top speed is the metric we are interested in. Indeed, the horse takes its name from its ability to lay waste to their more esteemed equine cousins over distances up to a quarter of a mile (around two furlongs).

There seems to be some debate (different sources report things differently) as to whether Winning Brew was a quarter horse or a thoroughbred. However, we are happy to side with Guinness here, partly due to their reputation but primarily because 44mph is the sort of speed we would expect from a thoroughbred.

We have already said that even thoroughbreds are capable of hitting higher speeds in short bursts but quarter horses can actually go considerably quicker still. Quarter horses trace their history back to the 1600s and the US prairie. Iowa in the Midwest is a popular centre for modern quarter horse racing and according to the Iowa Quarter Horse Racing Association these animals reach a staggering 55mph!

That is seriously fast and even if we generously allow that a thoroughbred might hit the line at 50mph (a figure that we have not seen anyone claim but we’re feeling generous), the quarter horse is 10% faster still! The Encyclopaedia Britannica’s entry for quarter horse racing states that there are “11 officially sanctioned race distances from 220 to 870 yards (201 to 796 m)” but the vast majority of those take place at the eponymous quarter-mile distance of around 400m.

How Do Horses Compare to Other Animals?

We have now seen the incredible speeds that horses can run at but how does that compare with nature’s other speedballs? Let’s have a look.

So, whilst horses are fast and they, along with greyhounds, would easily beat any human in a foot race, they have some way to go when it comes to matching the very fastest animals around. And horses are going to struggle to get away from the pesky but surprisingly speedy horseflies!

The peregrine falcon, in its incredible, almost vertical, stooping dive, tops out at well over 200 miles per hour when it is hunting other birds in flight. Not even the quarter horse can get anywhere near that!