The Grand National is one of the most popular and famous horse races in the world. Certainly in the UK, it is the contest on which more people place a bet than any other. It also happens to be one of the toughest races to predict due to the massive field, monster distance and strong possibility many of the runners won’t make it to the finish. With this in mind, many punters will find all manner of ways to pick their bets. This could be based on a favourite jockey or trainer or the horse in question’s previous form in the race. Or it could be slightly more random… their name starts with the same letter as yours, you like the colour of the jockey’s helmet or, maybe, because it is the only grey in the race.

People are often drawn towards things that stand out from the crowd in many walks of life. And there could well be evolutionary psychological roots to the innate appeal of novelty (but we’ll save that for another day). For now, let us focus on what grey horses are, how they have performed in the Grand National over the years and whether there is anything that means a grey is more (or less) likely to win future Grand Nationals.

What Is a Grey Horse?

It may sound a strange question to ask, but with so much slang and racing lingo kicking around the sport, you could be forgiven for assuming the obvious answer might not be the correct one. In this case, however, it is both obvious and correct to say that a grey race horse is simply an animal whose coat is grey in colour.

Grey horses can be born a different colour (most often bay, chestnut or black) and then become progressively greyer over time. Some horses grey swiftly while others can reach adulthood while still showing signs of their birth colour. Most grey horses have black skin and black eyes and the pattern of greying can be either fairly uniform or more dappled and patchy in nature. Grey horses may sometimes appear to be white, but greys differ from true white horses because white horses – who are born white and stay white – have unpigmented (and hence pink) skin. Though grey horses lose the pigmentation in their hair, they retain it in their skin.

It has been estimated (by Peter Willett in his 1989 book “The Classic Racehorse”) that around three per cent of Thoroughbreds are greys, though this figure could have changed slightly either way since then and there is no specific information about how the figure was calculated. Whatever that precise figure is, there is no doubt that greys are a rarity and even in the monster field of the National there are unlikely to ever be more than two or three.

All Greys from One Horse

All horses in Flat and National Hunt horse racing in the UK are from the Thoroughbred breed. And all Thoroughbreds originate from just three stallions who were imported to England in the 17th and 18th centuries: the Byerley Turk, the Darley Arabian, and the Godolphin Arabian.

Aside from these three stallions, there were several others who helped develop the breed (from a genetic perspective), one of whom was Alcock’s Arabian (also known as Pelham Grey Arabian). As the stallion’s second name suggests, he was a grey and it is widely believed that every single grey horse racing today originates from Alcock’s Arabian.

How Many Grey Horses Have Won the Grand National?

It is common to see at least one grey horse entered into the Grand National. But there have only been three grey horses who have triumphed in the Aintree race (though one has won it twice).

Grey Horses Who Have Won

Other Grey Horses of Note in the Grand National

Though only three grey horses have ever won the Grand National, a good few others have come close over the years. Here are a few of the more recent occasions on which a grey almost made the grade.

Grey Horses Who Have Nearly Won

Do Grey Horses Hold Any Advantages in the Grand National? 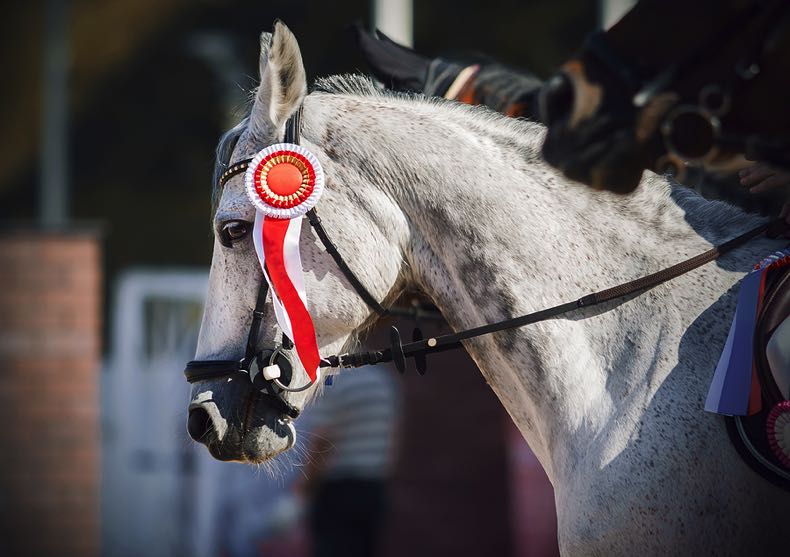 Now we’ve seen how many greys have won the Grand National at Aintree, let’s ascertain whether they possess any discernible advantage over their non-grey rivals in the showpiece race (or indeed in any race). In a word, no. At least, there appears to have been no specific research undertaken to scientifically ascertain whether greys may hold any advantage or disadvantage in relation to horses of other colours.

There have been suggestions over the years that greys may perform better than darker-coloured horses in hotter conditions as their fair coat is better able to reflect the sun’s rays (and conversely that darker-coloured horses might retain more heat in colder conditions). But there is no real evidence to back this up that we have encountered. And we tend to think that the difference it would make would be rather minimal when belting along at 30-odd miles per hour.

No Advantages Other Than They Are Easier to Spot

In reality, there are no proven physical advantages a grey horse has over a horse of any other colour. Likewise, there is no reason why a grey should perform less well either. But perhaps there is an advantage, of sorts, for the punter. In general, it is unlikely you will have more than one or two greys in a race, even a race with as many entries as the Grand National. (Unless, that is, the race is for greys only, as is the Grey Horse Handicap at Newmarket). So assuming there is one grey horse in a race and the rest are darkly coloured, if you are in the stands at a racecourse, or indeed watching it on your TV screen, it is a lot easier to spot your runner if he/she is grey.

Part of the fun of watching (and betting on) horse racing comes from observing your chosen stead working their way through the field as the race develops, before making a charge to victory in the final furlong or two (at least, that’s how you hope it goes). But if you spend the majority of the race trying to figure out which is your horse, it lessens the enjoyment somewhat. And this is even more likely to be the case the Grand National with a field of 40 horses and in which there is a good chance at least one horse will fall at any given fence. Knowing that your horse is still in contention (i.e. they haven’t fallen) is also a lot easier if it happens to be the only grey (or one of maybe two or three) in the race.

The Numbers Are Inconclusive

That said, the results above seem to indicate that greys have not done all that well in the Grand National. The inaugural National was held way back in 1839 and the 2021 edition of the race will be the 173rd running of the world’s most famous steeplechase. In all that time we have seen greys win just four times, with two of those being by the same horse, way back in the 19th century.

We do not have an accurate figure for how many greys have entered the race in total and what exact percentage of the field they have made up over the years. However, if we say that one in 40 runners has been grey, we would expect such a horse to win once every 40 years. Similarly, if we use Willett’s figure of 3% of Thoroughbreds in general being grey, we would expect a broadly similar return (a win every 33 years or so).

Four wins from 172 runs to date (ahead of the 2021 Grand National) is, then, slightly worse than we might expect. Of course, should a grey rock up to Aintree and deliver the goods this year, then five wins from 173 would be pretty darn close to our basic estimate of the average expected return. Perhaps a grey is due a win?!

Conclusions: Greys in the Grand National

Grey horses often catch the imagination of the public in a way horses of other colours often don’t. The most famous grey of them all, 1989 Cheltenham Gold Cup winner Desert Orchid (known simply as Dessie to his legion of fans), may have something to do with this, at least in recent times. Dessie won the Irish Grand National in 1990 but never actually entered the National.

Aside from the “Dessie factor”, it is hard to pin down exactly why grey are so popular with many fans, other than the fact they tend to stand out from the crowd. When it comes to the Grand National this can be particularly useful given the large field. But given there is no discernible advantage (and no major disadvantage) a grey horse has in relation to horses of other colours, despite some seemingly spurious suggestions to the contrary, the affection many people have towards greys may come down more to aesthetics than anything else. So, while it might help you identify your runner when watching the Grand National, betting on a grey won’t give you any greater chance of landing a winning bet.