It is fair to say the video assistant referee, better known as VAR, has not been an overwhelmingly popular addition to Premier League football since making its debut in the 2019/20 season. While some fans have embraced the use of technology that allows officials to have another look at key incidents, they appear to be in a rather small minority.

A Football Supporters Association survey published in 2021 found that 95% of match-going fans and 94% of those watching on TV believed VAR had “made watching matches less enjoyable”. A further 44% of regular match-goers said that they would be less likely to attend matches in future should the situation not improve.

It was very interesting to watch Euro 2020 (played in 2021) and how VAR was used there. The entire tournament seemed to pass without any controversial incidents, bar the very occasional minor one. More often than not the system left the referee’s decision to stand and whilst there were still some disagreements, fans, players and managers are happy to accept this with what will always be subjective calls. The Euros made it very clear that the problem was not the use of video technology in and of itself, but rather how it was being used in the EPL.

Given what we saw at Euro 2021 and the stark opposition to how VAR was used in the English top flight, it should come as little surprise that the Premier League have responded. They did so by announcing several changes to the rules ahead of the 2021/22 season. Some are directly linked to VAR while others will have an impact on which way VAR decisions will go following a review.

In theory, offside calls should be an easy one for VAR as they are not subjective. A player is either onside or they are not. However, for a range of reasons, offside decisions were often the most controversial and, from a fans’ perspective, also the calls that seemed to sap the most fun out of the game.

No matter which Premier League team you support, there is a very good chance you will have found yourself celebrating a goal only for the dreaded blue and red lines to appear. These lines are used when VAR has reason to believe that the goalscorer, or player involved in the build-up, found themselves in an offside position.

Part of the reason the ‘possible offside’ check is so dreaded is because of how unbelievably harsh some of the calls ended up being, or at least seeming, to the affected fans and players, and even neutrals. You had goals ruled out because players were quite literally millimetres offside and in some cases, it was not actually clear they were offside at all. 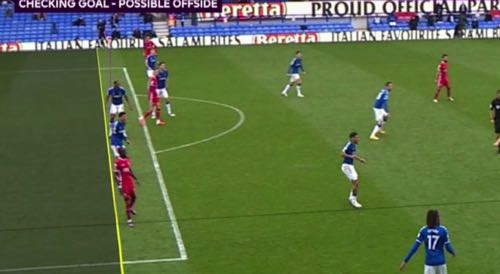 The above incident is one of several extremely controversial examples spotted over the course of the 2020/21 season. Here, Sadio Mane set up Jordan Henderson for a late winner against rivals Everton only for VAR to rule he was offside. If anything is offside here, it appears to only be an elbow which is not what the offside rule was ever intended to penalise. Of course, whilst this was a glorious moment for Everton fans, it was pure agony for the Reds and few could argue it was within the spirit of the game, the laws, or what VAR was intended for. 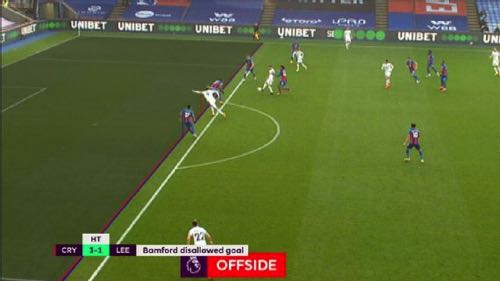 An even more controversial, some would say scandalous, example of VAR getting things wrong saw would-be goal scorer Patrick Bamford penalised because his arm was offside. Whilst the laws did cover what part of the body should be included for offside decisions, this one seemed especially unfair as the Leeds forward was simply indicating where he wanted the ball to be played. We could give you several more examples of these types of decisions but with any luck the 2021/22 season will not add to this collection.

This is because the Premier League have stated that marginal offside calls, much like the two examples above, will now benefit the attacking side. VAR will follow the same process of drawing the one-pixel lines as before, but these lines will then be made thicker. If they overlap, the situation will be deemed onside.

Assuming it works as intended, this will prevent elbows, noses, toenails and stray armpit hairs from being offside. Speaking about the change, Premier League refs’ chief Mike Riley believed it could give the Premier League back around 20 extra goals a season. What’s more, it is in keeping with traditional guidelines that always gave the benefit of the doubt to the attacking side.

This is far less of an important change but it should help reduce irritation among many football fans. Previously, assistant referees would not raise their flag during an “immediate and obvious goalscoring opportunity” even if the attacking player collecting the ball was clearly and obviously in an offside position (even by several yards). In such cases, the flag would only go up once the chance had been converted or missed. By letting play continue, it prevents the situation of an erroneous offside flag preventing what would have been a possible goal.

The new policy does not instruct officials to raise their flag when a player is clearly offside, but rather officials will be more strict with the definition “immediate and obvious goalscoring opportunity”. Collecting the ball out wide in the attacking third would no longer fall under the definition if there were covering defenders. This change will reduce the number of times the assistant intentionally keeps their flag down even when they have spotted an offside, no matter how close the call. Instead, they can simply go back to immediately halting play just as they used to do in the past.

Fouls are a tricky subject as they are one of the most subjective elements of football. What is a fair shoulder charge and what is excessive force? If a player gets the ball first but then the player, should that be a foul?

Refs to Raise the Bar on What Constitutes a Foul

For anyone who watched Euro 2020, it was noticeable how many challenges and coming togethers that officials let slide. Referees’ general willingness to be more lenient with challenges was very well received by fans as it helped games flow much more. Having a stop-start affair full of petty little fouls, on the other hand, rarely makes for a thrilling spectacle.

Perhaps swayed by the success of this slightly more hands-off approach seen on the international stage, the Premier League decided to increase the threshold for what is considered a foul. They now want refs to consider three factors: a) is there clear and proper contact? b) does that contact have a consequence, does it make the attacker fall over? c) if there is only little contact, is the motivation of the player to use it in order to go down?

Although an impossible-to-avoid element of subjectivity remains, refs are under very clear instructions not to give ‘soft’ fouls in the 2021/22 season. To win a free-kick there needs to be a “proper foul” according to Riley who described the league as being “all about competitive and compelling contact”. So, a small element of contact should no longer be sufficient for a foul and this should see VAR more reluctant to disallow a goal due to a foul in the build-up. The issue of players “buying” fouls, conning the ref and going down at the slightest touch is one that riles many fans, so this is a change that is sure to be popular in the stands. The question is, did Man City know about this change when they decided to spend £100m on Jack Grealish?!

A Higher Threshold for Awarding Penalties

As discussed above, the Premier League is attempting to crack down on soft fouls in which players are really looking to go down under minimal contact, such as the slightest touch in the back. Although players going down easily is nothing new, it was happening a considerable amount inside the box during the 2020/21 season. A number of very soft decisions (and extremely harsh handball calls) resulted in there being 125 penalties awarded, the highest of any Premier League season ever by a long way.

Spot kicks became a great source of goals for a few players with Man United’s Bruno Fernandes converting nine penalties and Jamie Vardy firing in eight. In both cases these accounted for at least 50% of their total league goals. It ended up creating quite a vicious cycle as referees were clearly happy to award soft penalties, which meant players regularly went looking for them.

The increasing threshold on what constitutes a foul, discussed above, applies both outside and inside the box. Referees have been made aware in no uncertain terms that they should stop giving soft penalties, instead there needs to be a “proper foul”. The penalty Raheem Sterling won against Denmark in the European Championships has been used an example of a penalty that should not be given under the new rules. Riley stated that even if the on-pitch referee called a foul, he would now expect VAR to overturn the decision. Similarly, the penalty Dani Ceballos won against Everton following extremely light shin contact would also be overruled.

Subsequently, we could well see fewer penalties compared to the 2020/21 season, perhaps a drop of around 20 going by data from previous years. This may not please goal-loving neutrals and may lead to tighter, cagier games but defenders will certainly breathe a sigh of relief. 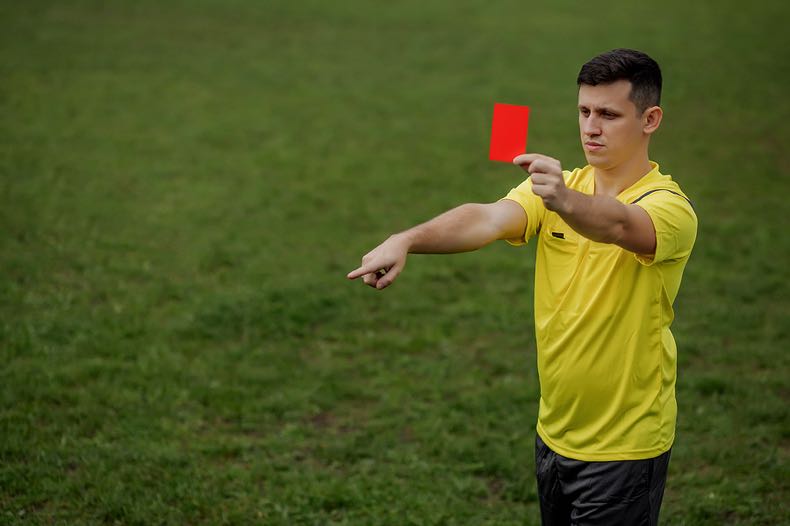 The handball rule is another that is often subjective and seems to change frequently, or at least how it is interpreted changes. In the early days of VAR, we saw a huge number of very dubious penalties for any contact with the hand. Thankfully, that changed a little but more modifications are in store this season.

Relaxation of the Handball Rule

This rule change came from the International Football Association Board (IFAB) rather than the Premier League and was announced in March but not implemented until July 1st. It will apply to Premier League matches as they must apply the laws of the game as stated by IFAB. This latest change to the endlessly controversial handball rule is that an “accidental handball that leads to a team-mate scoring a goal or having a goal-scoring opportunity will no longer be considered an offence”.

Incidentally, the announcement came on the same day that Fulham were denied a potentially valuable equaliser against Tottenham. In this instance, the ball was cleared against Mario Lemina’s arm before falling to Josh Maja who swept the ball home. Under the new rules, the goal would not have been overturned by VAR like it was at the time. Had Lemina scored himself though, the goal would still be disallowed as it remains an offence for a player to score directly from, or immediately after, their own handball.

If the rules are implemented as intended, we should see more free-flowing football in the 2021/22 Premier League season. It is hoped by giving fewer soft fouls, players will be encouraged to stay on their feet more, reducing the need for the referee to even make a decision. Fans should also enjoy seeing plenty more goals that would have previously been harshly ruled out for offside. The rule changes may not lead to much of a net increase in goals though because the higher threshold for fouls should result in a significant drop in the number of penalties.

Lastly, the tweaking of the handball rules should keep fans a little happier but it is hard to think there will ever be a system that works for everyone. Handballs are always such a subjective call and incidents tend to look worse than they actually are when slowed down by VAR. For all the good these changes seek to do, it seems almost inevitable that we will all be talking about VAR, one way or another, before long!