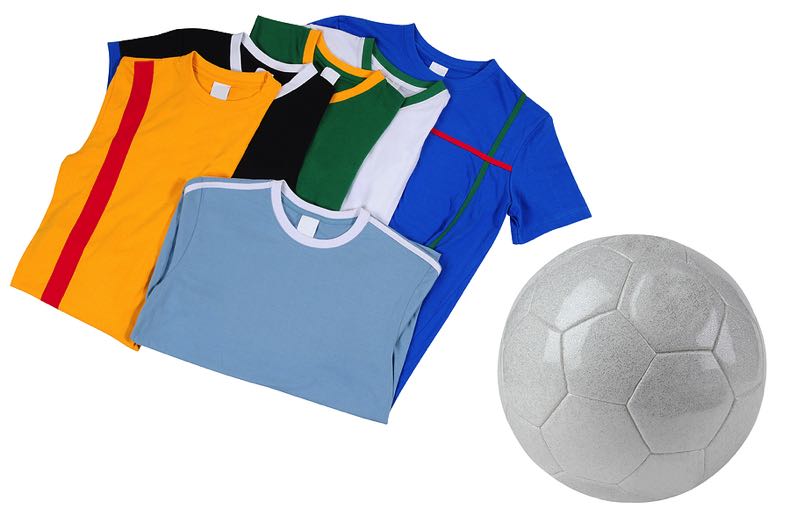 Premier League shirt sponsors have certainly changed over the years. In 1992 when the Premier League as we now know it was first founded, many clubs entered the pitch wearing shirts adorned with brand names, such as Sharp, NEC, Carlsberg and McEwans. Back then technology and alcohol were viewed as the most sought-after products amongst football fans, encouraging these companies to sponsor football clubs.

Since then, however, consumer demands have shifted, and following the liberalisation of gambling laws in the mid-2000s, many football fans have turned towards the gambling market, making use of high street bookmakers, as well as newer entrants within online betting. This has encouraged a spate of betting companies to sponsor football clubs. At the time of writing, during the 2021-22 Premier League season, 10 clubs will play on the pitch wearing and showcasing the names of betting companies on their shirts.

The Clubs Sponsored By Betting Companies

Listed below are the Premier League clubs displaying brand names of betting companies on their shirts during the 2021-22 season as a result of their sponsorship partnerships.

Whilst some of the companies in this list are prominent in the UK, others have a more worldwide focus and may be more prominent in other parts of the world such as Asia. On some occasions these companies aren’t present in the UK at all, showcasing the impact of the Premier League’s global reach on sponsorships, with this reach considered a valuable promotion strategy for companies all over the world, regardless of whether British natives can interact with these companies or not.

Most of the betting sponsors featured in the above list are displayed prominently on the front of the shirt. However, Aston Villa set themselves apart by promoting their betting partner on their sleeve. A relatively new way of displaying sponsors on shirts, sleeve sponsors were first introduced for the 2017-18 season and although currently not pursued by many betting companies, perhaps OB Sports will attain great success from their sleeve sponsorship campaign, and we’ll soon see more betting companies and football clubs get added to the sleeve sponsor list.

However, whether new betting companies can be added to this list will all depend on the result of an ongoing review of the 2005 Gambling Act, with the verdict of this review expected to be announced in November 2021. There are strong calls on both sides of the argument and it will certainly be interesting to see which side of the fence things fall.

The high extent of Premier League clubs being sponsored by betting companies hasn’t been welcomed by everyone, with some people viewing an increased exposure to betting adverts as a gateway to gambling addiction. It’s for this reason that pressure is being put on the government by gambling charities and others, calling for them to initiate a complete ban on gambling sponsors within football. Perhaps some of the arguments have merit but a ban on clubs having betting sponsorships when so many clubs rely on these sponsors for their financial survival probably isn’t a worthwhile path unless these clubs are given the time needed to find a viable replacement sponsor.

EFL chairman, Rick Parry, backs this up, having been quoted as saying that a gambling sponsorship ban would be “catastrophic” for many clubs. An alternative solution was suggested by Darren Bailey, the FA’s former director of football. This would involve a cap being applied on the number of gambling sponsors permitted within a league, but that would be unlikely to fill the 10 clubs currently sponsored by companies with confidence regarding the future of their current sponsorship status. In the end, only time will tell what will happen to betting company sponsorship deals in football, but if pressure groups get their way, the sponsorship landscape may look very different in the near future.

The Betting Company Who ‘Unsponsored’ Their Partner Club’s Shirt 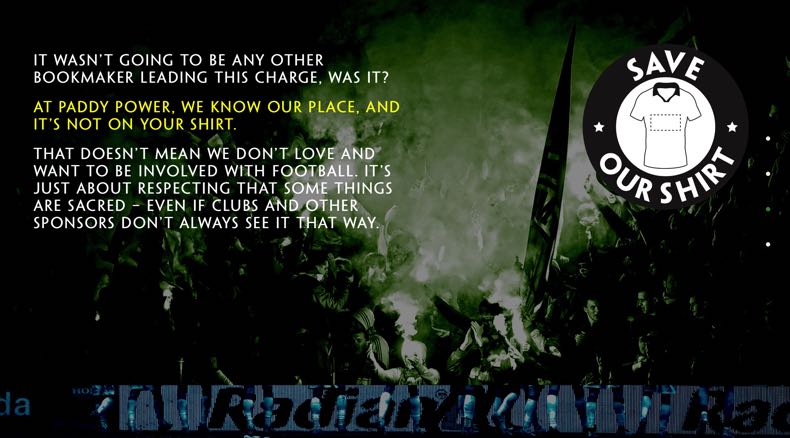 Although the betting companies that sponsor Premier League clubs sometimes seem to be painted as villains, there have been occasions when these companies are instead viewed more as heroes in an age in which football seems like it’s being taken over by corporations.

An example of such heroism happened in 2019 when Paddy Power partnered with former Premier League club Huddersfield Town to become their shirt sponsor. The partnership began with great uproar and controversy as Huddersfield Town ‘showcased’ their new Paddy Power sponsored kit in a friendly vs Rochdale, with the company’s name branded on the shirt in a style similar to that of a sash. Many fans considered the kit ‘hideous’, wishing that the kit was some sort of joke.

Very soon their wish was granted, when it was later revealed that although Paddy Power were the official shirt sponsors for Huddersfield that season, they were in fact partaking in a newly self-created ‘Save our Shirts’ initiative. Paddy Power were quoted as saying “shirt sponsorship in football has gone too far”, and as part of this initiative decided not to display their brand name on Huddersfield’s shirt at all, as opposed to the sponsorship norm of prominently featuring company names on kits.

The stunt went on to be well received by many football fans and achieved Paddy Power’s central objective of increasing their exposure. The initial launch of the ‘hideous’ kit drummed up interest and curiosity, getting the public talking and wondering about the thought process behind such a seemingly unsightly sponsorship placement. The later revelation of the unsponsored kit had an older generation of fans looking back and longing for the days when kits weren’t covered in corporate logos.

As a result, some fans might have begun to consider Paddy Power as something of a Robin Hood figure fighting to prise football away from the hands of big corporations and get it back to the loyal fans. Such a sponsorship campaign goes to show that betting companies shouldn’t necessarily be vilified. Instead, sometimes these companies may, like Paddy Power, have an idea of what fans want, meaning they have the potential to work alongside partner clubs to find ways to improve the club-to-fan connection.