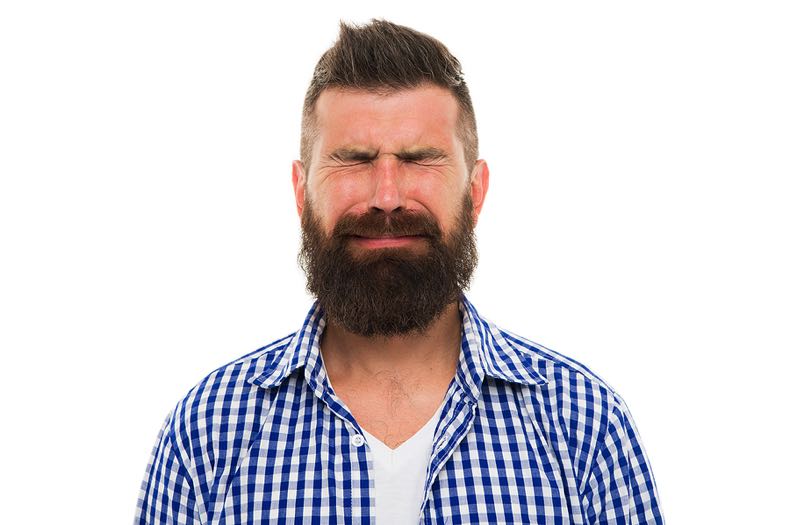 Many bettors have faced the tricky conundrum of whether now is the right time to cash out their bet. Take the money and run, hold off a little longer, or stick it out until the bitter end? Most bets come with the choice to cash out and like with most choices, there is always a ‘wrong’ one.

Cashing out can often be used to great effect but there are instances where punters have been punished and, badly so, by their lack of faith in their own bet. Here are some of the worst instances of a punter losing out on a huge windfall because they did not have the courage to see things through.

For most of us, winning £200 from a £1 weekend acca would represent a major success. From a small stake that is a fantastic return and one you are unlikely to better many times in a season. Rather than feeling extremely satisfied with a £200 win though, a 22-year-old Jack Baines must have felt sick to his stomach once the weekend was up.

His seven fold bet extended the full weekend and featured a couple of really shock results including Crystal Palace to beat Man Utd away at 8/1 and Newcastle to beat Spurs away at 12/1. The latter fixture was not scheduled until the day after but at the time Jack had one result in the bag and four more of his picks were currently winning, including Palace. With all four teams only enjoying a one goal lead though, you can forgive the Scunthorpe lad for losing his nerve and cashing out. A big factor behind the decision was that being a Red Devils fan, he was certain they would score at some point.

Doubting Palace’s resolve and also having second thoughts about how Newcastle would get on at Spurs, he cashed out for £200. All selections did end up being winning ones though, meaning he missed out on the chance for a £98,513 pay out. That £200 all of a sudden doesn’t seem like a win at all!

English football was heading into its final few weeks of the 2018/19 season when one ambitious punter braved a massive 15-fold accumulator. Featuring a real mix of fairly safe options and rather more risky picks, the bet offered a return of £24,641 from a mere £1 stake. Eyeing up a lucrative prize, it is something of a wonder why they decided to abandon their lofty ambitions so soon.

Having gotten off to a reasonably positive start, but still with a very long way to go, the punter decided to take advantage of a cash out offer worth just £14.32. Presumably on the grounds this was better than nothing. How he ended up kicking himself though as all his selections ended up being correct. For his sake, we hope he does not make the same mistake again.

In the above example, you have to question the decision to cash out such a big accumulator so early on. In this case though, we have the fullest amount of sympathy for the luckless bettor who made a perfectly reasonably choice at the time. Their eight-fold acca included a variety of teams to win and both team to score selections. In this case, the customer stood to win around £12,500 from a tiny £0.50p bet. Five selections had already come with three to play later in the evening. One of these was Real Madrid v Villarreal. At the time, Villareal had the meanest defence in La Liga, having shipped just 15 goals in 23 matches. Given that the Yellow Submarines found themselves 2-0 up, you cannot blame the punter for thinking Real Madrid had no chance of turning things around.

This is exactly what happened though, in part aided by the injury suffered by goalkeeper Sergio Asenjo after 35 minutes. Without their usual set of hands in goal, Villarreal let in three goals as Los Blancos completed an unexpected second-half turnaround to send them top of the table. 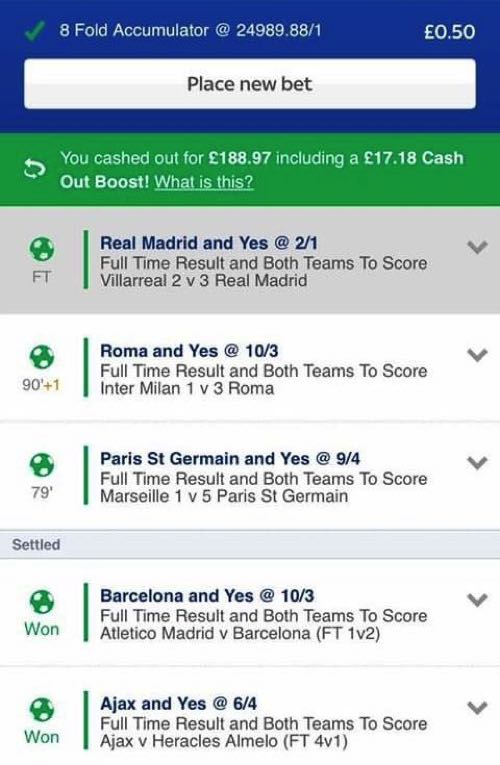 If you think the unlucky soul responsible for the above bet was feeling bad about their cash out decision, wait until you see this. Here, a poor Mike Newman spurned the chance to win a huge £292,000. It’s the biggest win missed out on to feature on our list and it’s one so large that it actually hurts us even to look at a little bit.

One surprising element of the bet is that it only features seven win only selections, most of which were FA Cup ties. Having a ridiculous eye to spot an upset, Newman backed the likes of non-league Barnet to beat Sheffield United at 11/1, League Two Oldham to beat then Premier League outfit Fulham and Newport County to topple European football hopefuls Leicester.

Although a very tiny consolation in the circumstances, he did gain more than £5,000 back from his £5. But whilst £5,000 might pay for a nice holiday, almost £300k is more like a new house! 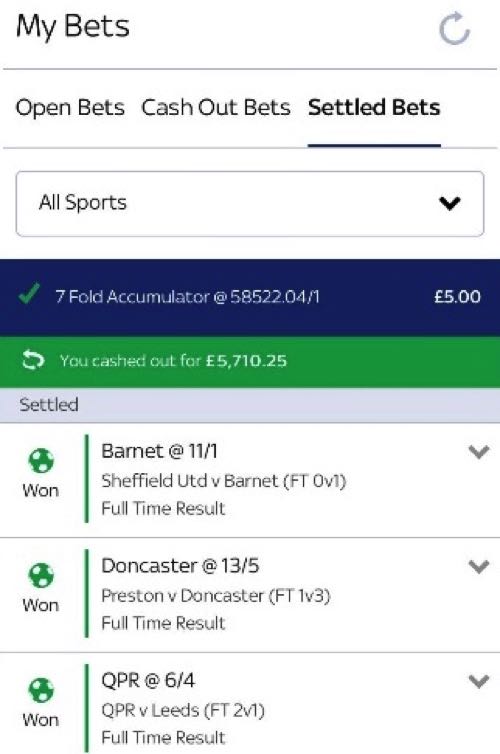 Even the most unlucky of bettors will only find themselves making a really poor cash-out call once. Usually one incident of being burned is enough for people to learn their lesson and never cash out their wagers ever again, no matter how tempting it might be. It is therefore quite incredible that we have an example of someone making two awful cash out decisions on the same day.

Honestly, we cannot quite figure out what was going through this chap’s mind. He had two accumulators on the various matches across the day, some featuring the same game. One had a £2 stake with odds of 500/1 and the other had a £3 stake at odds of 1,500/1, adding up to potential return of £5,500. With results going against him though, Curtis Linney cashed out both his bets, the first for a total of £1.30 and the other for £3.13, coming in at a grand total of £4.43. In other words, a small loss.

His rather baffling decision to take such a pathetic offer came back to haunt him as all of his 21 selections (10 + 11) ended up winning. Not only did he miss out on what would have been a very sizeable weekend win, but to rub salt in the wounds he actually ended up losing 57p. Naturally, social media, which is not that supportive at the best of times, had little sympathy for poor Linney for his ill-judged decision.

6) Bitten by the Foxes

According to Ladbrokes, 47 customers bet on Leicester to win the 2015/16 Premier League season before the first match got underway. Even this is more than you might have guessed as the 5000-1 Foxes had finished 14th the season prior and were in the Championship the year before that. Whether through immense faith or good fortune though, these customers ended up placing an outrageous bet.

Only 24 of the bets stood, however, by the time Leicester were crowned champions. The rest had chosen to cash out earlier than this, most tempted by the handsome cash out being offered to them. One customer, for instance, a Leicester fan, cashed out their £20 bet in March for a £72,000 profit. Tidy, especially as the £72k payday came alongside his team winning the title!

Among all these success stories though, there was one customer though who got things so horribly wrong. Having put 50p on the Foxes to win the Premier League, this hapless customer opted to cash out the bet when Leicester beat Sunderland in their opening game of the season. It is possible that they intended to bet on Leicester to win their first game, rather than the league, and they cashed out upon realising their mistake. In any case, months later a Ladbrokes spokesman stated that the incident “will go down as the worst cash out decision in history”.

Given that we have provided examples of punters missing out on much more than £2,500, we would not agree with the claim but it is certainly worth of a place on our list.

There is always something admirable about pulling off a 10+ acca but the bet Ashley Downes placed during the 2020/21 Premier League tops anything we have seen before. From just two combined selections, Downes stood to win £40,602 from his £2 stake. How? Well, he bet on two seemingly ridiculous full time scores. The first was for Liverpool to beat Crystal Palace 7-0, which they duly managed despite keeping Mohamed Salah on the bench for the opening 57 minutes of the game.

The other part of the double bet was for Manchester United to beat Leeds 6-2. With the scoreline at 4-1 just before half-time, Downes was mulling over a cash out offer of around £3,500 which must have been tempting in the circumstances. He decided to hold off for a while but as the clock ticked on, the cashout price began to drop and eventually he took the offer of £2,279 with 62 minutes on the clock. 11 minutes later, United had added two more goals and Leeds had got another themselves, putting the scoreline at 6-2. Is that a two grand win or a 38 grand loss?! 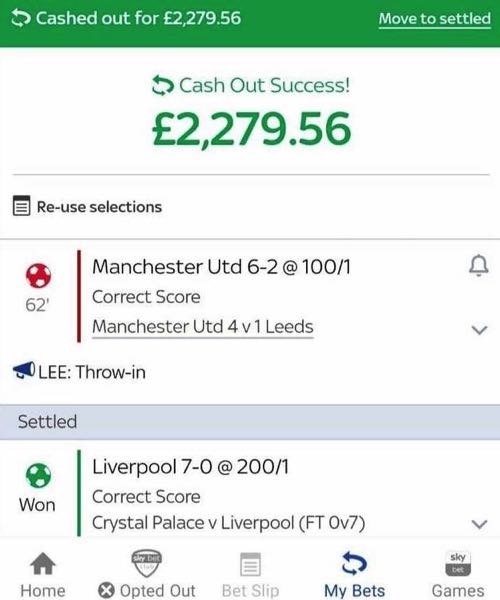 This entry to the list is more an honorary mention because of a customer’s failure to cash out rather than cashing out a winning bet. It is perhaps the most unlucky of all our entries though and by far the most tragic. The hapless customer had only wagered 25p but had picked five games in which both teams would score in both halves. With a typical price for this market around 10/1, the punter stood to win a massive £45k from a mere 25p wager.

With four of the games a success, the only game remaining was Man City v Spurs, a match where most punters would predict goals aplenty. At half-time, the scoreline was 1-1 and by 56 minutes Spurs, who were being completely dominated, had popped up with a very unlikely looking second. A City equaliser did look inevitable but this punter held firm, not due to a strong conviction though, but because his phone was dead and he had forgotten about the bet.

If that was not unlucky enough, in the dying moments of the game Gabriel Jesus scored for City, or at least so he thought. VAR, which had only been introduced in Premier League games a week earlier, ruled out the strike as the ball hit the arm of Aymeric Laporte in the build-up. City ended the game with 30 shots but just one point while the luckless punter, both unaware and unable to cash out, got 4 picks right but £0. Just one dodgy VAR decision away from a very cool £45,000. Oh well, chin up, only 25p lost! 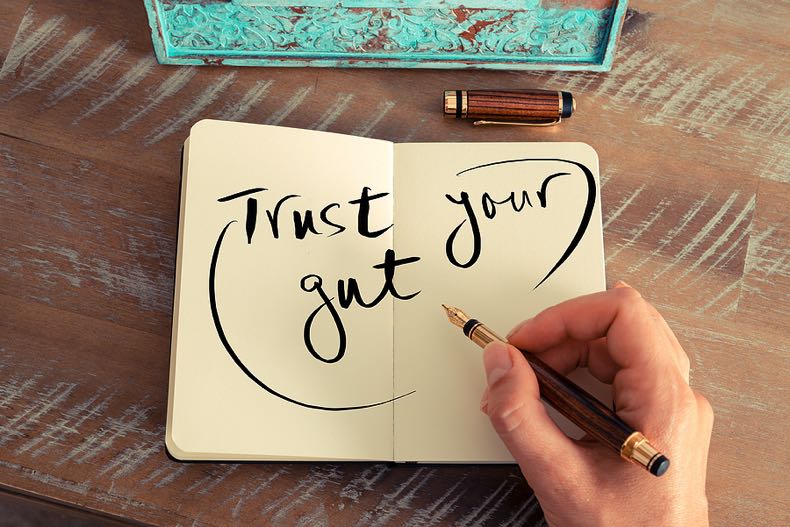 Although it can be tricky, the best tactic to employ if you do want to cash out a potentially big bet is to completely ignore the final scores. You may desperately want to seek vindication that your judgement to pull out was indeed well-placed, but it is not worth the risk. Just keep your eyes away from the scores and away from your list of settled bets. Should you look and see that you blew the chance of a massive payout, even the most ‘glass half full’ among you are going to feel awful. Sometimes ignorance is truly bliss and bettors would do very well to remember that.

That said, the other, possibly wiser approach, is to simply ignore cash out altogether. You made the bet for a reason so why not have a little faith? Cash out is simply handing another slice of value back to the bookie as you will never receive the “true” value of the bet. Put your phone away, forget about cash out and hope that your luck is in!