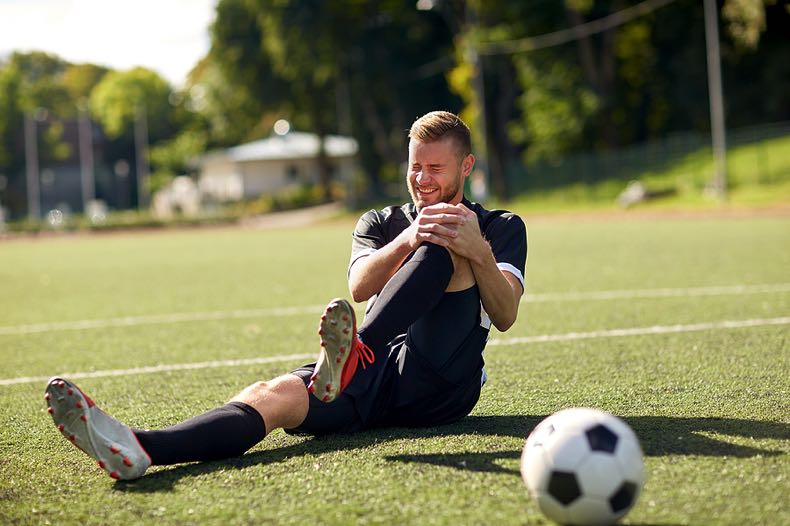 Before a half of football ends, the fourth official will hold aloft their electronic board to indicate how many additional minutes will be played. In a typical game, during the first half this will generally be one or two minutes and for the second half between three and five. There are exceptions of course and in many cases, as we will soon discuss, the awarded injury time is not close to what it should actually be.

As well as focussing on injury time and how it works in football generally, we will also examine the implications of injury time from a betting perspective. For most bets placed, injury time makes no difference but for a select few markets, things are less clear cut. If you’re interested in knowing what some of the longest injury times have been, take a look at our article, Longest Injury Time in Football.

The Basics of Injury Time

During a game of football, there are many incidents that cause a break in play. Some of them can be very small, such as a player retrieving a ball to take a thrown in or a corner taker waiting for a giant centre back from his team to enter the box. Others, however, can be much longer, such as a player requiring on-pitch medical treatment or a VAR offside review. The point of injury time is not to add on the time lost through all the very minor stoppages, but to cover all significant ones. By adding lost time on, this should, in theory, ensure that every football game sees a similar amount of actual action.

You will see injury time referred to by several other names including additional time (as per FIFA documents), extra time and stoppage time. Calling it extra time, while exceedingly common, does have the potential to be misinterpreted though. This is because in knockout matches that end all square, often a 30-minute period of extra time is added in an attempt to find a winner. This 30-minute period (two halves of 15 minutes) regularly features injury time itself so it is possible to have extra time in extra time, so to speak.

How Is Injury Time Calculated? 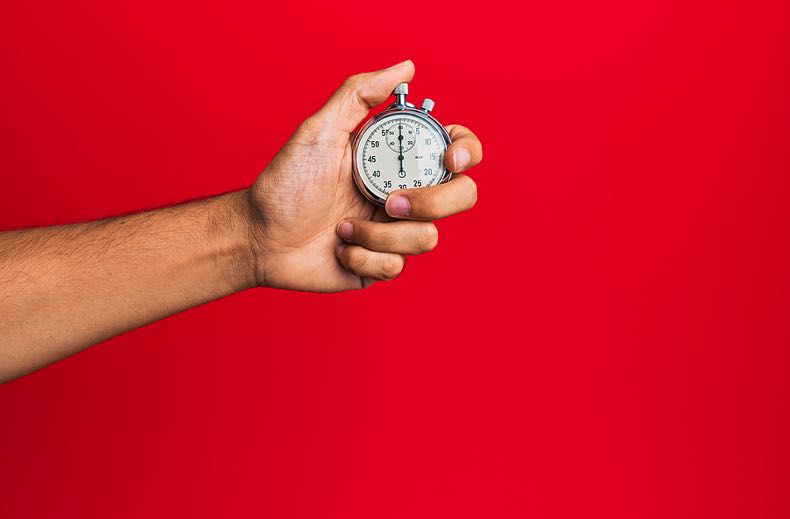 The actual decision of how much time is added on boils down to what the referee deems is appropriate. This can sometimes be a long way off what fans or managers believe to be the most appropriate length. Complaints tend to arise when a referee allocates too much time but the opposite can also be true. In 2012, Sir Alex Ferguson called the four minutes of second half added time in a 3-2 loss to Tottenham to be “an insult”. His reasoning for this being insultingly inadequate, in his view, was because there were six substitutions made, an appearance from the physio and time-wasting during goal kicks.

Only a Rough Guide

While the Scot fumed in his post-match interview, there is nothing to say the referee was ‘wrong’ per se. As a general guide, it is said that each substitution and goal should add on 30 seconds but this is so loosely applied and is by no means an official guideline. The only thing referees are instructed to do is to ensure that the minutes allocated are played in full, at a minimum. The FA states that injury time “may be increased” but “not reduced”. Despite this, you will sometimes find referees blowing a half-time or full-time whistle prematurely.

Paul Tierney caught some flack for doing exactly this in January 2021 when he blew his half-time whistle six seconds early, right as Liverpool had launched a promising attack against Manchester United. Although he should not have blown early, he was perfectly entitled to blow the whistle during an attack. There is nothing in the rules to state that the ball must be in a particular area of the pitch before the whistle can be blown. Mind you, it is customary in the modern game to allow any promising attack to play out first.

Adding even more time on is a far more common sight though. While it can just be a matter of seconds it can be longer than this if there has been an insufficient amount of football played within the initial allocation. There are many clear examples of this but one of the best comes in the thrilling 5-7 contest between Reading and Arsenal. Referee Kevin Friend had initially indicated there would be four minutes of added-on time but still had not blown his whistle when Theo Walcott equalised (taking the game into extra time) after six minutes.

How Accurate Is Injury Time?

There is a clear trend towards referees not issuing enough injury time in football matches. As small stoppages can be ignored, there should not be 90 minutes of ‘actual’ football but there should be more than we are currently getting. Research carried out in 2018 from the CIES Football Observatory shows that the play is only actually active 55.3% of the time across 37 competitions examined. It was, however, a little higher for the ‘big five’ leagues, ranging between 55.3% and 58.5%.

How Long Occurrences Events Should Take

According to FIFA, injury time should take into account the following occurrences: substitutions, injuries, disciplinary sanctions, drinks breaks and the extremely vague, “any other cause, including any significant delay to a restart”. Normally things such as goal kicks, free kicks and throw-ins are not considered to be significant but they can if they go above a certain threshold. Here is how long these standard events should take.

If through time wasting, or for any other reason these events take much longer than this, then the referee ought to add the extra time on at the end of the half. To see to what extent this actually happens, the statistical minds at data and polling site FiveThirtyEight looked at a selection of 2018 World Cup matches. When doing so they calculated how many minutes should have been added on, according to the best interpretation of the FIFA regulations.

Out of the first 32 games of the tournament, only once was ‘too much’ injury time added on, and even then the difference was a mere 10 seconds. In all other cases, the game was cut too short, with the worst offenders featuring in the table below.

On average each game saw 6.2 fewer minutes than it ought to have done, raising real questions if the current injury time system is fit for purpose. In some games, being cut a little short ultimately made no difference but Japan versus Senegal, for instance, finished as a draw. Had the game been rightfully longer, perhaps one side would have found a winning goal.

What Is the Alternative? 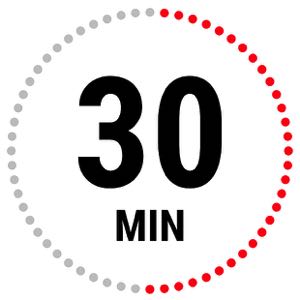 There is only one real alternative that has any weight to it and that is playing two 30 minutes halves in which the clock is stopped every time there is a break in play. This would bring football in line with many other sports and ensure each game is of consistent length, rather than being down to the referee’s discretion. It would also eradicate the issue of time wasting as the clock would simply be stuck, unmoved, until some dawdling goalkeeper took their goal kick.

For many, it makes for an appealing option. You have to think officials themselves would be fairly keen too given that they can so easily catch flack for adding the “wrong” amount of injury time, or indeed blowing their whistle too late. Stopping and starting a stop-watch for every corner, goal-kick or foul might be a hassle at lower levels but in the top professional leagues this can easily be controlled by another figure and simply broadcast on the big screen.

Could we see 30-minute halves any time soon? Well, the laws of football always evolve so it is certainly possible. It would be one of the largest changes the game has seen though and one likely to cause a great deal of controversy. The football-law makers, IFAB (International Football Association Board) did consider the proposal in 2017, with Gianfranco Zola coming out in support of it. The IFAB ended up dismissing the idea but there is no reason why it could not return to the table if it attracts even greater public support.

With the current injury time system likely to stick around for the near future at least, it is worth talking about how it can impact your bets. The main time it comes into play is when placing a ‘time of first goal’ bet. For this market, bookies tend to give you a range of intervals to select from. Intervals of 10 minutes are very common so they will look something like this

If the first goal is scored after 90’ +3’ minutes, so the third minute of second-half stoppage time, then this is easy enough as the winning selection would clearly be ‘80:00 or later’. The possible confusion arises if, let’s say, a player scores in the sixth minute of first half-stoppage time. In this case, 40:00-49:49 is the winning wager as the goal would be recorded as 45’ (+6’) rather than 51. No matter what bookmaker you use, a goal scored in injury time will either go down as being on the 45th minute or the 90th minute depending on the half.

For a knockout clash that will head to a 30-minute period of extra time in the event of a draw, note that a selection of ‘80:00 or later’ will not be valid for this. As standard, football bets relate to the match after 90 minutes. If the FA Cup final was 0-0 after 90 minutes and then one team found the winner in extra time, the correct option from the first team to score market would be ‘no goal’.

The other market that can be impacted by injury time is ‘total goal minutes’. For the unfamiliar, this market requires you to guess the total aggregate time of all goals scored in a match. If Everton are playing Leeds and there are goals scored in the 13th, 30th and 60th minutes then the total would be 93 (13+30+60) minutes. It is a good market to consider if ever you think there will be very few goals (and the few goals will be scored early) or there will be a late flurry of them.