There are so many reasons why the Grand National is such a thrilling spectacle, one that manages to wow audiences every April. Not only is it the longest race in Britain, coming in at over four miles and two furlongs, but it features a whopping 30 fences that need tackling. These challenging obstacles make it the ultimate test of stamina and jumping ability.

Much of the excitement, however, comes from the sheer number of horses that compete in the race at Aintree. Very rarely, if ever, will you see such a large stampede of horses all battling it out for a shot of an extremely coveted prize. Large fields produce a lot of large odds and for this reason, many casual punters enjoy having a flutter on this race as anything can happen, even the most (seemingly) unlikely victories.

With any Grand National though, there are always some likelihoods. One of these is that not every horse will make it to the winning post. Due to the incredibly challenging nature of the test, a sizeable number of runners fail to finish each year. As the data show, this chunk is comfortably over half the field, so this is a test that does get the better of most.

How Many Horses Run in the Grand National? 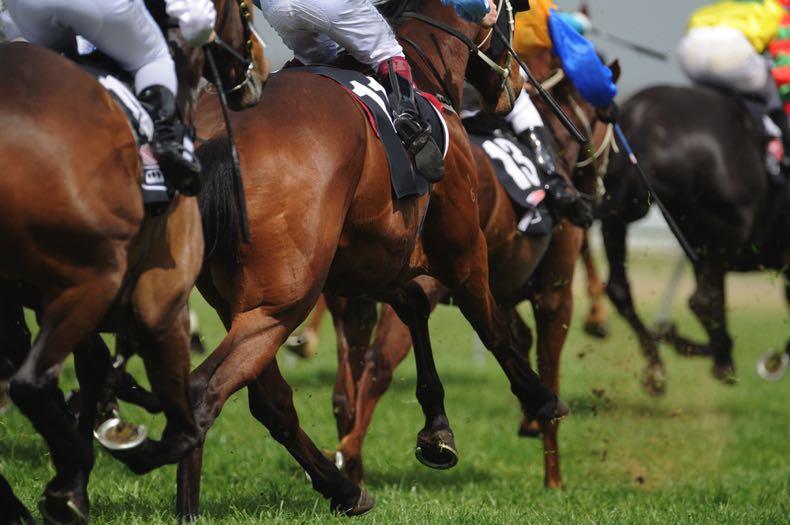 In order to calculate the percentage of finishers and non-finishers in the Grand National, we, of course, need to know how many horses start the race. This part is quite easy though because the modern-day Grand Nationals feature 40 runners as standard. Now, it is possible that some late drop-outs can see these numbers drop by one or two but this maximum allocation of 40 is seen almost every time. Between 2005 and 2021, only the 2014 (39) and the 2018 (38) races failed to see the full number start.

The Grand National never has any problem filling the 40 available spaces because of the incredible demand this race has. Each year it is heavily oversubscribed with many horses failing to make the cut. It is not a subjective call as to which horses are accepted and which are not, it is purely a matter of ratings. All horses are ordered according to their official rating and the top 40 from these are confirmed for the race.

Horses that are the 41st to 44th best ranked on the list will be allocated as the reserve options for the contest. If a confirmed runner drops out then the first reserve runner will take their place. Should there be another withdrawal later on, the second in reserve has the chance to enter the fray and so on. Reserves are not typically called upon very often though with trainers very reluctant to pull their horse(s) out of this extremely lucrative race. Nevertheless, reserves are sometimes utilised (10 got the call up between 2001 and 2018) and this helps the Grand National ensure it runs at full capacity in most years.

It is worth mentioning that this 40-runner standard has not always been the case. When digging into the archives, you can find both much larger and smaller fields that have competed in the race. A barely believable 66 runners took part in the 1929 edition of the contest, something that would be considered too unsafe by today’s standards. As for the lowest-attended National, this came in 1883 with a mere 10 horses competing in the marathon test.

How Many Horses Finish the Grand National?

When thinking about how to tackle this question, we wondered just how far back in time we should go. Two or three decades initially offered appeal but we remembered that significant changes were made to Aintree’s Grand National course in 2012 and even more so in 2013. These modifications have ultimately resulted in the race being much safer, but less demanding than it used to be.

Ahead of the 2012 running, three of the most notorious fences (the first, the fourth and Becher’s Brook) were adjusted to make them safer. The following year, 12 of the 16 obstacles had their timber frames replaced with the much more forgiving plastic birch. This switch has subsequently seen a huge reduction in the number of Grand National causalities. In the first eight renewals with the plastic birch, there were only two deaths, neither of which were directly caused by contact with a fence.

Because of this, it makes the most sense to look at data from 2013 onwards, so here is what we have found, taking data from 317 runners in total. 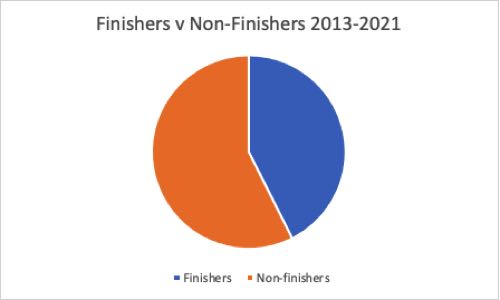 The precise year-by-year breakdown is provided below. On average, the race sees a little under 17 finishers with anything between 15 and 20 being within the normal range. The 2018 running is a slight anomaly because the official going was heavy for this running, something that is not typical for an event run in April. As you can imagine, adding very challenging conditions to an exhausting race did many horses no favours.

You would be wrong to assume it is always just horses at the far end of the betting that fail to finish the contest. Out of the 167 horses that did not complete the race, 60 set off at odds of 25/1 or less than and 34 of these were trading at 16/1 or less. When looking further into the data there is very little correlation between the perceived quality of horses and their likelihood of finishing.

Over the period examined, the average starting price of non-finishers was just over 38/1 compared to around 37/1 for those that did finish. You can perhaps now see why this race is often considered something of a lottery. That said, the favourites, despite lacking a particularly successful record overall, do at least make it to the end of the contest far more regularly than most. Between 2008 and 2021, only two favourites or joint-favourites failed to finish the Grand National, so they can usually be relied upon to go the full distance.

Reasons For Not Finishing

There are five main reasons why a horse might end up not finishing the Grand National. As you can see from the data gathered below, being pulled up is by far the most common in modern renewals. This is a decision a jockey will make whenever the horse they are riding is well off the pace, showing signs of an injury, having breathing difficulties or otherwise struggling. Basically, the horse has no chance of winning so it is in the interest of both the jockey and their mount to stop racing.

A considerable way behind horses being pulled up, you have horses falling, or unseating their riders following a bad landing, near enough neck-and-neck as the second most common factor. You then have brought down as the fourth most common, this being where a horse falls because of another runner, rather than through their own mistake. Lastly, you have a refusal from the horse to either start the race or to jump over a fence. There was one case of a refusal to start and two instances of refusing to jump mid-way through the race. In the case of Mumbles Head in 2013, he had tackled 29 jumps before plainly refusing to take on the last. 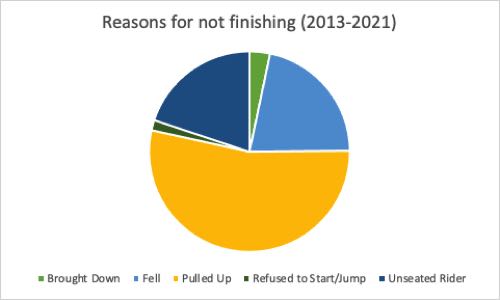 It should be stressed just how much an impact the changes of 2012 and 2013 (but much more so the latter) have changed the reasons for not finishing a race. If you look at the years immediately before, so 2009, 2011 and 2011, so many more horses fell or unseated the jockey (46) than were pulled up (19). Thanks to the kinder fences in place now, it is stamina rather than jumping ability that has a greater say on whether a horse can finish the National. It has merely changed the reason for non-finishing though rather than having seen a drastic reduction in the non-finisher rate.

Although the race is much safer than it once was, you are still more likely than not to back a horse that does finish the contest. Because of this, many punters prefer to hedge their bets and pick two or three horses rather than put all their eggs in one basket.