Being a jockey is not a profession for the faint-hearted. Imagine sitting on top of a 160cm tall horse travelling at 40 mph or more, with only a saddle, a pair of stirrups and a thin rein to prevent you from falling off. This probably sounds terrifying enough but then in some races add in the fact that the horse will be leaping over obstacles at least 4’6” (steeplechases) or 3’6” tall (hurdles).

How much danger are jockeys actually in though when they mount their horse and compete in a race? Health and safety concerns are increasing priorities across sports in general and measures have been taken to improve both rider and equine safety. In some steeplechase races, for instance, such as the Grand National, some of the most challenging fences have been made more forgiving in order to reduce the number of fallers.

Despite numerous measures designed to protect jockeys though, the sport, like many others, still comes with an unavoidable element of risk. Just how dangerous is the thoroughbred horse racing game though? And, how much more of a risk is carried by jump jockeys compared to flat jockeys? As well as answering these questions we will also briefly compare the dangers of horse racing against some other popular sports.

A sport being dangerous can either mean it results in a lot of non-fatal injuries and/or it frequently results in fatalities. To begin with, we will focus on the rate of non-fatal injuries in horse riding and the most common type of injuries sustained. The British Horseracing Authority maintains a database of all jockey injuries, which interestingly even records injuries that occur off the racecourse. They do not tend to publicise these figures but fortunately there are several academic studies that have been able to acquire some very insightful data, especially from across Great Britain and Ireland.

Overall Injury Rate of 0.57% in Racing

One paper, which looked at the period between 1992 and 2000, found that from 745,896 rides, including both flat and jumps racing in Britain and Ireland, there were 4,248 injuries. This provides an overall injury rate of 0.57% so, in other words, this was the chance of a jockey getting injured during any given race (based on that particular sample). Helpfully, this study also looked at jump and flat racing separately. Combining the data from Great Britain and Ireland, we can see that jump racing, rather unsurprisingly, was responsible for a much higher proportion of all injuries, despite there being fewer jump races.

Another more recent study that looked at racing in the Republic of Ireland between 2011 and 2015 published very similar findings. They found that jump racing produced 49.5 falls per 1,000 rides, an injury rate of 1.01%. With the much safer flat racing though, the number of fallers per 1,000 rides dropped to just 3.8 and the chance of injury declined to 0.14%. So, overall, the sport was almost as likely to result in injury as it had been two decades prior, indicating there is only so ‘safe’ you can make something that carries a significant and unavoidable element of risk.

That said, a study published by Davies et al., examining young professional jockeys did report lower figures for both falls and injuries. It must be noted, however, that part of this is because it looked purely at in-race injuries and did not include those that occurred at the parade ring, starting stalls or after a race had concluded. The authors also note that younger jockeys will have been more recently fall-trained compared to older jockeys. Additionally, younger bodies tend to be more resilient so it is less likely a fall will result in injury (at least this is the case with jump racing).

When looking across all three papers, it is interesting to note how more dangerous falls during a flat race tend to be. When combining the data (unweighted), for flat racing any fall is 42% likely to result in an injury while a jump racing fall, which can usually be better anticipated, is much lower at 16%.

It is worth noting that the first two studies we looked at largely align with the number published by the Injured Jockeys Fund, a charity designed to support the lives of injury jockeys and their families. According to their data, a jump jockey is injured one in every 83 rides, giving an injury rate of 1.2% while in flat racing the chance of injury stands at 0.17%. In both cases, these rates are a little higher than what both academic papers found but not by a huge margin. This could be due to an increase in jockeys reporting injuries as Turner et al. reported, when carrying out their earlier research in the period from 1992 to 2000, that soft tissue injuries were likely to be under-reported.

What Defines an Injury?

This brings us to an important question of what is considered an injury. In the second study we looked at, they used a widely accepted definition taken from another publication, which states an injury is “any physical complaint sustained by a person that results from competitive riding, training or other recognised activity that brings a person into contact, or in the close vicinity and with the potential for contact, with 1 or more thoroughbred racehorses, irrespective of the need for medical attention or time loss from horse racing activities”.

The study from O’Connor et al. (like most others in the field) includes injuries sustained outside a competitive race itself, although these only represent a small fraction of all racing-linked injuries. It is also interesting to note that an ‘injury’ does not have to be significant for it to be recorded as such, although in many cases they can indeed be as the next section explains.

According to Turner et al., soft tissue injuries are the most common type of problem a jockey is likely to sustain.

This includes ligament or muscular sprains, swelling, and bruising (contusion). The 2011 to 2015 data from Ireland also backs this up, finding that soft tissue injuries accounted for 61.54% of injuries in flat racing and 68.80% of injuries in jump racing.

The second most common injury a jockey is likely to sustain is a fracture, with this being something that made up 15.38% (flat) and 18.06% (jump) of all injuries. Next in line, and not too far behind there are concussions. Even though the compulsory use of skull caps helps this problem a little, concussions were still responsible for 11.54% of flat race injuries and 6.06% of injuries in jump racing.

Quite surprisingly, the risk of dislocation is remarkable low for a jockey. In the O’Connor et al. study, there were dislocations reported while the Turner et al. paper found the danger of dislocation was just 0.02%. Interestingly though, another study, which asked 706 professional jockeys about their reported injuries in the USA, dislocation represented 7% of all problems. This, if nothing else, serves as a reminder that the safety of jockeys and the nature of the risks they face, will vary around the world. Indeed, another American study, found that racing in California had a lower injury rate (1.02%) than the likes of Australia (1.12%) and Europe (1.19-1.76%).

Most Common Areas of Injury in Racing

As for which body part is likely to be the area of injury, it is the limbs that are in the greatest danger as you can see from the data below. The upper limb includes the shoulder and nearby bones (scapula and clavicle) while the lower limb covers everything from the hip downwards.

The term ‘career-ending injury’ can be a slightly challenging term to define on the face of it. It could be for instance, that a jockey suffers a relatively minor problem but this proves to be the last straw as they have been injured too many times. Similarly, it could be that they are suffering from constant pain even if they are not too sure of what caused it and this forces them to retire. Medical papers, however, usually apply the term as being an injury that is so severe that it forces a jockey into a retirement without them being able to compete in another race.

An Average of 3 Per Year

As for how common these types of injuries are, they are relatively rare albeit not extremely so. A study by Balendra et al. found that between 1991 and 2005, there were 45 career-ending injuries sustained by jockeys competing in Great Britain, so an average of three per year. Out of these 45, 14 of them were flat jockeys, while the remaining 31 were jump jockeys.

The average age of the jockeys was not especially old either, coming in at 31.71 years. The most common career-ending injury sustained was to the head (20%) although the exact nature of the head injury varied frequently. Overall, this data shows us that the risk of a career-ending injury, per race, was on average 0.0038% although the actual risk is higher for jump racing and lower for flat racing.

Bruises, sprains fractures and concussions are part and parcel of being a jockey but most will spend a full career without suffering anything more serious. Career-ending injuries, as discussed above, are not common and fatalities are thankfully even rarer.

How Dangerous Is Horse Racing Compared to Other Sports? 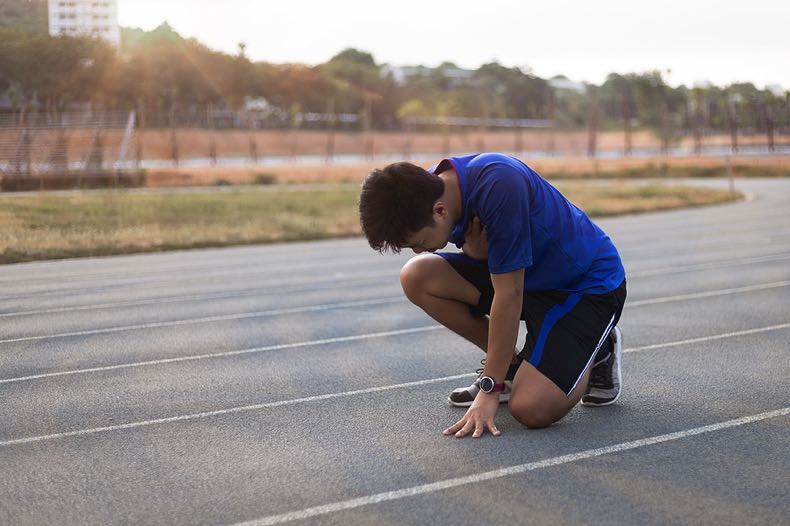 Now this is not an easy question to answer because it depends if you want to look at the danger per hour or per participation.

Take football, for example; you are more likely to end up injured in a game of football than you are as a jockey in a five-furlong sprint but is this a fair comparison? One takes 90 minutes whereas the other might be over in 60 seconds. You also have to factor in that most jockeys we see racing competitively are professional. You will find some amateur and apprentice jockeys too of course but even these will have a decent amount of experience on the saddle. In other sports though, more accessible to the wider public, you will find complete amateurs taking part, many of which will be in much worse shape.

This is partly the reason why, statistically speaking, running is quite a dangerous sport. If running regularly the chance of injury is extremely high, especially as a novice. You also have the risk of something more serious occurring either due to a cardiac problem or being hit by traffic if street running. That is one benefit of being a jockey, i.e. it is not exhausting on the cardiovascular system. The sole danger really comes from falling off the horse, not suffering a heart attack or similar.

So, while comparisons can be hard, we can safely say that being a jockey is much safer than many extreme sports like base jumping, boxing, mountaineering or mounting climbing (especially free soloing). These all come with far higher fatality rates and even in less extreme sports such as running, rugby, football, motor racing and gymnastics, these are all far more likely to result in an injury (per game/race).

So, being a jockey is a long way from being one of the most dangerous sports in the world but does carry risks with it. As such, it should always be acknowledged that, in particular jump jockeys, do face a risk during every race they take part in.