Whether for commercial, military or leisure use, drones are becoming an increasingly common feature of modern-day society. Although often used for good, they have sometimes made headlines for the wrong reasons, such as when delaying/re-routing flights and disrupting sporting events.

Given how controversial the Qatar 2022 World Cup is, the risk of some drone-related disruption is quite credible. Fortunately, for the organisers of the competition though, they appear to have found a solution. In what is akin to a fight-fire-with-fire approach, the World Cup will be deploying specialist drone technology to defend against ‘rogue’ drones. So, not only may we see some great battles on the pitch in Qatar, but there may also be some tackles in the sky too.

Why Is There a Drone Risk?

The World Cup, particularly one held in a controversial location such as Qatar, makes for an ideal place to stage some form of protest. As we have seen before at football matches, protests (whether environmental, political or whatever else) can take place in numerous different ways. Whether it involves people tying themselves to a goalpost, parachuting into the stadium or simply running onto the pitch, there is a range of options available.

Flying a drone over a stadium would be one of the ‘easiest’ ways of creating a scene though. Not only do you not require a ticket but security staff within the ground are helpless to do anything about it. A streaker running onto the pitch can be tackled but a drone flying 20m above them is pretty much untouchable. Additionally, any pilot is in a much better position to avoid capture for breaking the rules as they can be flying the drone from some distance away.

You may think the chances of some drone-related disruption are low but it has been increasingly common at football matches in recent years. In 2022, Brentford vs Wolves was delayed by 20 minutes due to an ‘unofficial’ drone hovering above the pitch. A year earlier a Mansfield Town vs Scunthorpe match suffered the same fate, as did a Rotherham vs Sheffield Wednesday fixture. Go back a further couple of years and a Yeovil Town clash with Crawley had to be paused due to a drone.

Admittedly, most of these are lower league fixtures, rather than fixtures capturing a global audience but people have been charged for flying drones over more high-profile football matches. In 2015, one man was fined £1800 for flying a drone over several Premier League matches including those involving Arsenal and Man City, plus a Champions League match at Anfield.

Another factor to consider is that there has been a huge increase in the number of weaponised drones used due to conflicts taking place around the globe. Indeed, many of the lethal drones are being used in countries close to Qatar, such as Yemen. Although the drone incidents mentioned above were just enthusiasts looking to get some great pictures, this is not to say any drone in Qatar would be used for such relatively innocent purposes.

How Will Drone Defence Work?

The plan for the Qatar 2022 World Cup is to have defensive drones flying high above the stadium prior to, and during matches. They are supplied by US company Fortem Technologies following a deal with the Qatari interior ministry.

When spotting a small rogue drone, Fortem’s ‘Drone Hunter’ will fire a net to capture it, at which point the rogue aircraft be carried to another location. This is not always practical for capturing larger drones so for these, a net with a parachute will be fired instead. The idea is that the target drone will become entangled in the net but will not crash down to earth, potentially hitting someone, thanks to the parachute.

Spotting any rogue unmanned aircraft is not done by eye, but rather through a series of radars that give a complete picture of the nearby airspace. Football fans will not see these drones hovering above them though as they do their patrolling around a mile away. So, if they work effectively, you will not even notice they are there.

The actual specific drone likely to be employed in Qatar will be the snazzy sounding DroneHunter F700, a model that has already captured around 4,500 drones. They have mounted cameras up front that feedback to ‘base’ as this camera also enables them to lock onto specific targets. After neutralising one target, it can be reloaded and sent back to fire again in the space of just three minutes.

Is Drone Defence the Most Effective Option?

When dealing with the threat of drones there are a few options available. One option that has been trialled in the past is releasing a bird, such as an eagle, to bring down the drone. Another, rather more brutal option would be to shoot and destroy the rogue drone using some sort of gun. Radar jammers, which look like gigantic guns, can also work as they allow the user to override the drone’s communication system.

The benefit of the net approach, however, is that it is largely safe (compared to using a weapon of some sort) and is more reliable than a bird. As for the radar jammer, this will fail to work if a drone is on a pre-programmed path, rather than being piloted live (which is likely to be the case). So, given the flaws of the other approach, having drones with a net appears to be the best option.

The Fortem Technology defence drones have a decent track record too, which is why they have been getting plenty of business of late. This is not to say that their systems are impenetrable though. It is possible for rogue drones to move extremely quickly, so fast that capture would prove very tricky. Dr Steve Wright at the University of the West of England, for example, has managed to design a drone that reaches a speed of 60mph in under a second. Another potential weakness of the planned defence system is that it cannot cope with a swarm of rogue drones. If multiple drones were to fly above the stadium at once, this would cause major issues.

Will Defence Drones Be At All Stadiums? 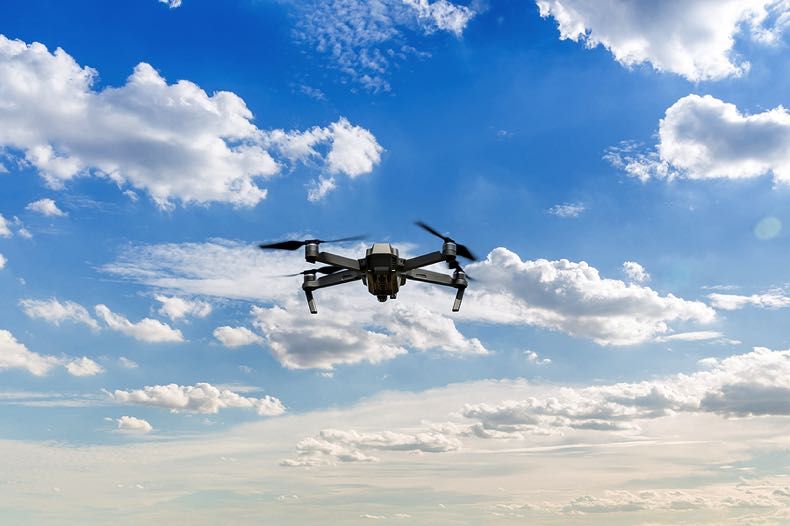 The plan is that every stadium used in Qatar for the World Cup will be under the watchful eye of the DroneHunters when matches are on. Qatar is very much under the microscope for this World Cup so many measures are being taken to reduce the chance of any unwanted incidents. If the systems work, either by proving a successful deterrent or bringing down rogue unmanned aircraft, you can expect them to become more of a regular addition to major football tournaments.

Are Any Other Measures in Place?

Qatar will not be relying solely on DroneHunters to protect themselves from unwanted rogue drones during the World Cup. In addition to American manufacturer Fortem, Qatar will also have France’s Bassalt anti-drone system and Italy’s Counter-Unmanned Aerial Anti-Drone Task group. As well as the task group, Italy will hand Qatar the ACUS portable jammer, a piece of equipment that was used in a joint military exercise back in 2021.