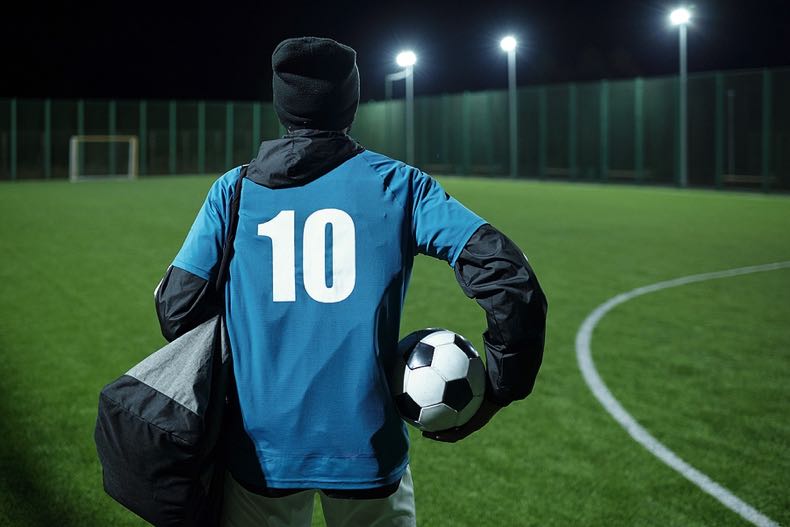 Football is a complex sport. There are all manner of different styles of play, of player and of managers in the professional and amateur game but one thing remains consistent – discipline is vitally important.

Losing discipline for just a moment can result in teams losing matches at any level of football, be it a lapse in concentration or lashing out and getting sent off. However, the players in this list have taken indiscipline to a whole new level.

It takes a lot for a football club to willingly part with an asset, which is ultimately what a player under contract is, but the seven footballers below pushed things so far that they were ultimately sacked. Let us take you through the stories below in this rogue’s gallery of players who were dismissed by their club.

There probably won’t be many readers surprised to see Joey Barton in a list of players who have been fired by their clubs. Barton has had a host of problems both on and off the pitch during his career, but Rangers felt that he was worth the risk when they signed Barton in 2016. They turned out to be mistaken.

By this time in Barton’s career he was already planning ahead for when his first career ended. He saw his future in management and despite a lack of experience in that field, he clearly felt as though he knew better than people who had been coaching for years.

That’s certainly the impression that Barton left on Rangers manager, Mark Warburton. During a training session Barton got into an argument, first with his teammate, Andy Halliday, and then with his manager.

Warburton was less than impressed and told Barton to stay away from the club. Although some attempts were made to repair the relationship Barton’s refusal to apologise ultimately led to Rangers cancelling his contract. Given the many things Barton has done over the course of his career and not been sacked, this may all seem rather innocuous but there was a lot going on behind the scenes too.

Joey Barton may be a predictable entrant on our list of sacked players but Jeffrey de Visscher is less so. The Dutchman had a rather uneventful spell at Aberdeen where he developed a reputation for being something of a super sub.

De Visscher wasn’t particularly happy with that reputation as he wanted a starting role in the team but it was an infinitely more desirable reputation than the one he developed after his now infamous exit from FC Emmen.

Once again, de Visscher had become discontented with the amount of playing time he was getting with the club. Unhappy with goings on in his career, de Visscher started enjoying himself away from the pitch until one night he was caught by police officers defecating in public. The details of the event are contested by those who were there and de Visscher himself claimed that he was – ahem – relieved from his contract because he wasn’t playing enough but his place in football folklore remains set in stone.

Dennis Wise made his breakthrough as a professional as part of Wimbledon’s ‘Crazy Gang’. Although he was only 19 when he started playing for Wimbledon, winning promotion with them into the First Division, Wise was right up there with the likes of Vinnie Jones, John Fashanu, Lawrie Sanchez and Dave Beasant in terms of his antics on and off the pitch.

Wise may have mellowed as he matured but he never lost that fiery spark even after leaving Wimbledon for Chelsea where he played 445 times. Leicester City, therefore, knew exactly what sort of character they were getting when they signed Wise in January 2001. What the Foxes couldn’t have known was how Wise’s combative spirit would wind up being the end of his short, disappointing spell in the East Midlands.

Wise struggled to make much of an impact in his first few months at Leicester. He did make more of an impact in pre-season training for the 2002-03 season. Unfortunately, that impact fell primarily on the face of his teammate, Callum Davidson.

Wise and Davidson got into an argument over a game of cards while Leicester were on a pre-season tour of Finland. Things escalated to the point that it became physical and Wise broke Davidson’s nose and jaw. Needless to say, the club were not amused and they sacked Wise for gross misconduct, bringing his disappointing time at Leicester to an acrimonious end.

Dennis Wise had long left Chelsea by the time Adrian Mutu signed for the Blues. The Romanian arrived in the heady early days of Roman Abramovich’s ownership of Chelsea and had fans dreaming that he would go on to become a Chelsea legend in his own right. The striker was signed for a fee of £17m, a lot of money almost 20 years ago.

Mutu made an instant impact with Chelsea. He made his debut just 11 days after signing in the summer of 2003, scoring a stunning winning goal against Leicester City. Further goals came in Mutu’s first season but he was soon jettisoned from the team by new Chelsea manager, Jose Mourinho.

Mourinho has fallen out with many players in his storied career but he was proven right when it came to the former Parma attacker. Suggestions that there was something in Mutu’s character that would preclude him from becoming a Chelsea legend proved accurate when the striker tested positive for cocaine in September 2004.

The authorities went in as hard on Mutu as a Dennis Wise tackle and they banned him from all footballing activities for seven months. However, that was not as draconian as the action taken by Chelsea themselves. Not content with ripping up Mutu’s contract, Chelsea pushed for compensation for a breach of contract. After protracted legal wranglings that stretched on and on … and on, the FIFA Dispute Resolution Chamber ordered Mutu to pay a fine of nearly £15m to Chelsea. Ouch.

Adrian Mutu was not the first Chelsea player to be sacked for failing a test for cocaine. Just a matter of months before Mutu arrived in west London, Chelsea cancelled the contract of Mark Bosnich for his own drugs ban. Clearly there is something about Chelsea!

Bosnich was signed by the west London outfit on the back of his performances with Aston Villa and Manchester United. It took a lot time for Chelsea fans to see what all the fuss was about though as Bosnich struggled to regain enough fitness to earn his place between the sticks. The Australian had just started to get some games with Chelsea when he tested positive for cocaine.

Initially, Bosnich claimed that his drink had been spiked on a night out. That excuse held no sway with the authorities who banned him for nine months. Chelsea promptly sacked Bosnich and were subsequently successful in their defence against an unfair dismissal motion.

Ahn Jung-hwan is the only player on this list to be sacked from his club while still on loan. That he was sacked by Perugia in the middle of a loan contract spoke to both the strength of feeling from the club’s chairman, Luciano Gaucci, and to the horrible atmosphere in which Ahn was forced to play in during his time in Italy.

Despite being one of the best players in Asia at the time he was signed by Perugia in 2000, Ahn had immediate problems settling into life at the club. An oppressive atmosphere, reportedly fuelled by racism and led by club captain Marco Materazzi, made life incredibly difficult for Ahn. However, he continued to battle away, crucially holding onto his place in the South Korea team before the 2002 World Cup which the country co-hosted with Japan.

As fate would have it, South Korea met Italy in the round of 16. An ill-tempered game was all square after 90 minutes and was only settled in extra time when Ahn scored a golden goal. The jubilation of the Korean fans was matched only by the anger of Italian football fans everywhere.

Italian papers claimed that corruption was the only reason for some of the refereeing decisions made in the match while Ahn was personally vilified for his goal. Gaucci, who was never the shy and retiring type, released a statement saying that Ahn’s contract had been cancelled as, “I have no intention of paying a salary to someone who has ruined Italian football.” We’re not entirely sure how legal that would be in many places but none the less, Gaucci did indeed sack his man.

One of the most popular pub debates amongst football fans is arguing about which footballer made the least of their natural ability. Ravel Morrison and Michael Johnson are two of the first names that most people mention but Nile Ranger is a bit more of a niche option.

After coming through the youth systems of Southampton and Crystal Palace, Ranger was signed by Newcastle who felt they had an excellent prospect on their hands. However, Ranger’s off field behaviour ultimately put paid to any hopes that Newcastle had for him.

Despite all the baggage that came with Ranger there was no end of clubs happy to take a punt on him after he left the North East. Spells at Swindon Town and Blackpool were followed by one at Southend where he finally looked to be finding some form and developing roots.

Southend even stuck by Ranger when he was sentenced to 10 weeks in prison having been found guilty of fraud. However, even the Shrimpers had a breaking point and after multiple breaches of club discipline Ranger was eventually cut free.