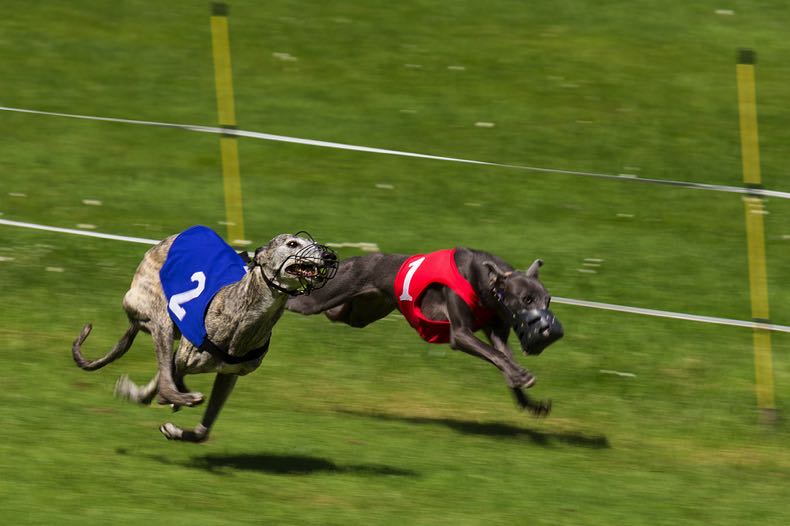 At its peak in 1946, greyhound racing attracted 70 million punters annually in the UK with totalisator turnover reaching near to £200m. In today’s money, the total amount bet at the tote would exceed £8bn. This is a truly staggering number when considering that today, the UK has a total gross gambling yield (excluding lotteries) worth around £10bn. While it may be hard to believe today, greyhound racing was that popular back then.

The industry heights of 1946 seem an extremely long time ago now with attendances having plummeted since and many venues having been forced to shut up shop. In recent years, nationwide attendances struggle to even reach two million despite an ample selection of races for spectators to choose from. There is no single cause to blame for the loss of interest in the sport but rather a range of factors have come into play, as we will explore in this article. In addition to this, we will pay close attention to the venues that are left standing and consider their prospects in an ever-changing environment.

Below you will find a list of the 19 licensed UK venues that still host greyhound racing. Note that this does not include the two venues located in Northern Ireland (Derry and Drumbo Park) as these fall under the jurisdiction of the Irish Greyhound Board, rather than the Greyhound Board of Great Britain (GBGB).

As for the future of those 19 tracks, Towcester has faced some serious financial issues as we will discuss later on. Naturally, they must be one of the favourites to be the next course to disappear. Henlow also appears to be in very imminent danger as planning permission for new houses has been granted on the current site. Councillors voted in favour of the plans to build the 75 new homes in 2020 so it seems likely that we will be bidding farewell to Henlow soon after a near 100-year long stay.

Dog Tracks: Survival of the Fittest

While there has been a general decline in the number of venues across the entire nation, the most noticeable number of closures has been located in London. Today the capital of England features just two official dog racing venues, Romford and Crayford, yet 25 others have come and gone as you can see below.

While most of these closures are not recent, they do demonstrate how risky an investment a greyhound track is. Given that many of these failed when greyhound racing was far more popular too, it is very hard to imagine we will see any new racing tracks appear in the English capital, especially given the cost of land.

As we have mentioned previously, greyhound racing as a sport is simply nowhere near as popular as it used to be. Despite this rather sharp decline during the latter half of the 20th century, there are definite signs that greyhound racing has now faced the worse of it.

Across several key metrics, there is a real indication that any fall in popularity has tailed off and the industry is now hitting largely consistent and reliable numbers. These show that the sport does have a sustainable future, at least over the short term.

The number of races is one measure that was largely stable during the previous full decade as you can see from the table above. The drop-off in 2020 was simply a result of the global health catastrophe that affected almost all sports and the related restrictions that were imposed on dog tracks. Excluding this anomaly, there have been in the region of 55,000 and 60,000 races annually, something which appears a sweet spot for the industry.

The number of registrations has also shown fairly minimal fluctuation during the same time frame. Although the general trend is of a tiny decline, there is still plenty of interest in getting greyhounds registered by the governing body (GBGB).

We wanted to include the races per dog registered figures as these highlight the typical workload a dog faces. The consistent figures, excluding the health crisis impacted 2020 data, shows that dogs have faced a largely steady workload this century. This is good news for the dogs as it shows that they are not being overworked to make up for a dwindling number of competitors.

The combination of these three graphs paints a fairly healthy picture of the industry now, assuming that it can make a recovery from the restrictions placed in 2020 and 2021. Having posted steady numbers for years, it is clear that greyhound racing still has a committed following and some ability to appeal to more casual spectators.

Will There Be a New Dog Track in Future?

Earlier in this piece, we ruled out the chances of a new track opening in London but what about elsewhere in the country? Although greyhound racing has steadied the ship so to speak when it comes to races/attendances, each venue is only getting a slice of a pie that has shrunk in size over the past few decades. It therefore should not come as a great surprise to know there are no immediate plans in progress to open up a new greyhound stadium. Unless there is an unexpected renaissance, it simply makes for a poor investment even in a restriction-free environment.

The most recently built greyhound stadium, Towcester, came at a cost of £1.5m. Substantial savings were made for this build though given that it was constructed inside the existing horse racecourse, meaning lots of the infrastructure was already in place. This didn’t stop the joint horse/dog racing course falling into administration in 2018 but greyhound racing did return under new ownership in 2019.

The only real whisper we have had about a future greyhound track in recent years has come courtesy of the Oxford City Council. Even this though did not involve plans to create a brand new venue from scratch, but rather reopen the Oxford Stadium that closed in 2012. The council were receptive to plans from businessman, Nik Budimir, to invest £25m into the facility which would see the return of greyhound racing and speedway amongst other things. The plans faced a fair amount of backlash from local residents however so it remains to be seen if they will come to fruition or not.

Why Are So Few Dog Tracks Left?

The first shaking of the foundations for dog tracks came thanks to the Betting and Gambling Act 1960 which allowed betting shops to open from 1961. It meant that punters no longer had to go to a greyhound track to place bets on the dogs, they could simply pop into their local bookie and do it there. It was a place to get better money too as bookies had a more favourable tax policy than the stadiums.

This policy no doubt contributed somewhat to the closures that followed over the next few years. In 1963 and 1964 we saw eight tracks close including the likes of Somerton Park, Clydeholm, Blackpool and Northampton. This true impact of this legislation was really felt two decades later though as these well-established betting shops were allowed to broadcast live racing. In 1984, new government legislation permitted bookmakers to offer live TV coverage of certain live sporting events, of which dog racing was one.

From 10 March, 1986 onwards, punters were able to reap the benefits of this new piece of legislation. It was a huge coup for the bookies but one that hurt dog tracks as no longer did they provide the only way of watching the live action. By this point, you had a discriminatory taxation system and a rise in off-course betting working against the dog tracks. From this perspective, government policy has definitely had a significant role in greyhound racing’s decline.

It is not just legislation to blame though, far from it. After all, other sports have been able to attract steady or even growing numbers of spectators despite these changes. Even horse racing, which faces similar challenges, was able to draw in 5.6m punters in 2019 despite several year-on-year declines. This figure is at least three times what greyhound racing manages to draw in. So, if not legislation, then what?

This would be a matter of reputation. In 2019, there were 4970 recorded greyhound injuries with 472 dogs put down as a direct result of their problems. Throw in the score that die from sudden death and annual deaths reach around 1000. according to greyhound charities.

Greyhound racing has also received bad press for a large number of other issues such as overbreeding, drug use, heat exhaustion, starvation and mistreatment. While these cases are usually only linked to a small minority of trainers, they have nevertheless helped to damage the sport’s reputation. The image the sport has obtained is proving hard to shake off and it has been coupled with the average British consumer becoming increasing ethically conscious.

The Future of British Dog Tracks

As stated before, we do not expect any fresh greyhound tracks to (re)open, with the possible exception of Oxford, but what does the future hold for all those left standing? We know that Henlow could well be knocked down to make way for some new homes but what about the other 18? The Telegraph claims that their future could well come down to the bookies.

Despite its troubles, greyhound racing still manages to generate in the region of £2.5bn a year in turnover for bookmakers. While lots of money is wagered, the courses themselves see very little of this. Bookmakers are asked to hand over 0.6% of their dog racing turnover (approximately £15m) but as this is voluntary, the British Greyhound Racing Fund does not receive all of this. In 2008, the GBRF pocketed £14m but a decade later and this figure was almost halved to £7.4m.

It is particularly harsh on greyhound governing bodies as horse racing enjoys a statutory 10% levy. Ultimately, how generous the bookies feel will have a significant impact on how greyhound tracks fair over the next couple of decades. After all, this is money that can be used to help the tracks themselves, whether directly or indirectly.

Additionally, in order to survive, it might be necessary for dog tracks to make some adjustments to be seen as more welfare-friendly places. Some greyhound activists have complained that running tight bends on oval circuits puts an extreme amount of stress on a dog’s musculoskeletal system. It could be, therefore, that some courses put in place a straight course for racing. This is what Goulburn in Australia announced plans to do in 2021 purely because it should reduce the injury risk the dogs face.

The GBGB also needs to make even more progress to ensure retired/injured greyhounds can avoid being put down because they are unable to find a new home. Numbers have fallen over the years but ultimately the aim is to bring it down to zero (from 324 in 2018). Through measures like this and a tough stance against negligent trainers, the image of greyhound racing, and by associate the courses, can gradually improve over time. Should this happen, more people are likely to be open to the idea of visiting their local dog track.