In August 2022, Paddy Power caused something of a stir by updating their terms and conditions surrounding the ‘best odds guaranteed’ promotion. For many years, Paddy Power, like many other major bookies, had implemented the promo across all UK and Irish horse racing. In a sudden and unexpected change, however, their best odds guarantee no longer covers all contests on both sides of the Irish Sea as standard.

What Is Best Odds Guaranteed?

For those of you who are a little unsure, we will provide a very brief overview of what the best odds guaranteed promotion (BoG) provides to bettors. Imagine that on the day of a race, you back a horse at odds of 5/1 with a £5 stake. Normally, your returns for this bet, if your horse was a winner, would be £30 (a £25 net win, plus the original £5 stake). With the BoG though, you could potentially win more than this. This happens if the official starting price (SP), i.e. the median odds from a selection of bookies taken at the start of the race, is higher than the price at which you backed the horse.

So, if the official starting price was 7/1, you would end up with £40 back (a £35 net win, plus your original £5 stake) instead of the £30 as detailed above. Should the staring price be lower than the fixed-odds you secured, for instance 4/1, then this makes no difference, as you are still paid out at the higher odds – in this case 5/1. With the possibility of enhanced returns at no extra cost, it is a promotion that horseracing punters really value.

In August 2022, Paddy Power alerted some customers to a few changes they made to their sports betting terms and conditions. Here they adjusted the rules regarding their accumulator and bet builder protection by changing the minimum qualifying odds per each leg to 1/4. The other major change related to their best odds guaranteed policy. The message stated that from 9th August 2022, “Best Odds Guarantee will (only) become available on selected UK & Irish meetings.” The key word there is “selected”.

So, no longer are all British and Irish meetings covered as standard. To find out which meetings are covered for the day, customers now need to check on the Paddy Power website. On their BoG promotion page, you can easily find a list of the courses covered. This page updates daily so you can always find out the races that will be covered before placing your bets.

For now at least, it seems that Paddy Power is committed to providing good coverage of meetings, even if they are not covering all of them. The table below shows what meetings fell within the scope of BoG across three days since Paddy Power’s change of terms and conditions. On all occasions, only one meeting was not covered by the best odds guarantee. It is odd that Paddy Power would anger some customers, for the sake of such a minor change but perhaps coverage will gradually decrease over time. If not, it is rather had to explain given that only a minor meeting was excluded each time.

What About Big Meetings?

One thing Paddy Power did make clear when bringing in this rule change was that BoG would still apply to races taking place during major festivals, such as the Cheltenham Festival, Royal Ascot, and Glorious Goodwood. This did help limit the negative reaction to the change, although customers were still not overly impressed, as you can imagine. Nevertheless, by keeping the big meetings unchanged, the ones that attract the bulk of the wagers, Paddy Power should not turn too many customers away.

How Can Customers Check If a Bet Qualifies? 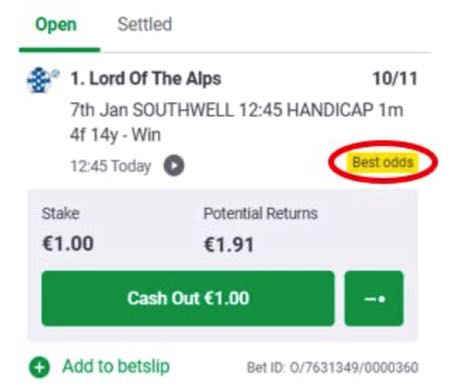 Before August, providing you placed your bet no earlier than 8am on the day of the race, you could be fairly confident that your bet on a British or Irish race was covered by BoG. With all races covered, you did not have to wonder if you had mistakenly selected from one of the excluded courses. Now, however, there is more reason to check if your bet qualifies as not all do as standard. Paddy Power’s method for highlighting bets that fall within the best odds guarantee remains the same.

In the open bets section of your account, a qualifying bet will appeal with the ‘best odds’ stamp. Note that you will not see this before the bet is confirmed. This best odds stamp will stay on the bet regardless of it ends up as a winner or a loser (or if you cashed it out).

What Caused the Change?

It is not customary for bookmakers to explain the reason behind these kinds of policy changes and this is no exception. We have to speculate that it is simply a matter of cost and Paddy Power are looking to boost their earnings through the move. As BoG as is something of an industry standard, it by itself does not tend to attract new customers, but it does cost bookies a fair amount of money.

So far, no other bookies has followed suit so it is just Paddy Power that has changed the rules to make their BoG more restrictive. This will no doubt push some of the more hardcore racing fans to other bookies but as the majority of meetings are still covered, the damage should be quite minimal.

It had been reported initially that Paddy Power had simply withdrawn BoG from 16 courses: Bath, Brighton, Chepstow, Doncaster, Ffos Las, Fontwell Park, Great Yarmouth, Hereford, Lingfield Park, Newcastle, Royal Windsor, Sedgefield, Southwell, Uttoxeter, Wolverhampton and Worcester. All of these courses are those owned by the Arena Racing Company, so there was speculation there had been some issue between them and Paddy Power.

The situation is not as clear-cut as this though as ARC courses do still feature on Paddy Power’s daily list, although they are the ones that also typically find themselves excluded from BoG. Hopefully more information comes to light in future but for now it remains something of a mystery.

Much like Paddy Power, Betfair is also part of the Flutter Entertainment group because the two names merged in 2015. Often in such cases, you see brands adopt the same policies but at the time of writing this has not applied to the best odds guarantee. Despite Paddy Power’s change, at the time of writing, Betfair has stuck with their very standard BoG policy that covers all UK and Irish horse racing (and even includes greyhound racing).

Do All Paddy Power Customers Still Qualify for BoG?

There was no change in the eligibility criteria for BoG meaning it is still available to all customers as standard. Paddy Power did, however, retain their right to exclude and/or limit the promotion to select customers. So, while the vast majority of players can benefit from this promotion, there are those that cannot, or at least not in its full capacity, for whatever reason. Unless you have been informed of this though, there is no reason to think your bets will not qualify for BoG, providing they meet the standard eligibility criteria.