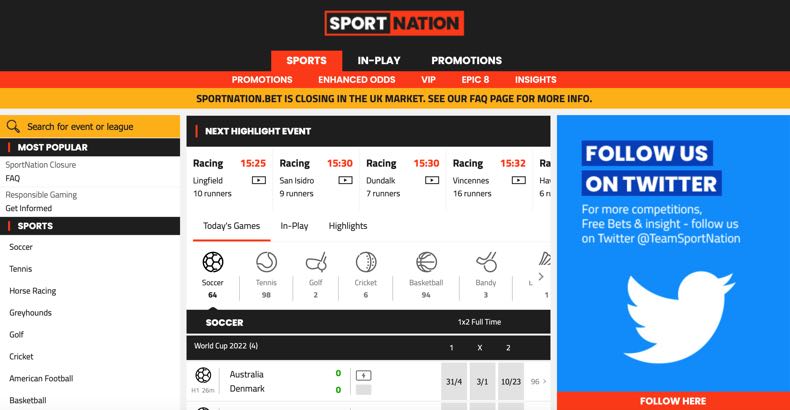 Such is the extremely competitive nature of online betting that it is an inevitability that not every brand can survive. Often smaller names find themselves muscled out of the market as they struggle to gain enough customers to stay afloat. This is particularly true in the UK market which is not only already very saturated but its high entry costs mean the break-even point is much higher compared to other locations.

The latest brand to fail in its attempt to become a mainstay in the British gambling scene is Sport Nation (sometimes written as SportNation). Note this brand is completely unrelated to ESPN’s SportsNation found on the other side of the Atlantic. The fall of Sport Nation has wider implications too as it also trigged the removal of Fansbet and Red Zone Sports from the UK market. So, what happened?

What Went Wrong for Sport Nation? 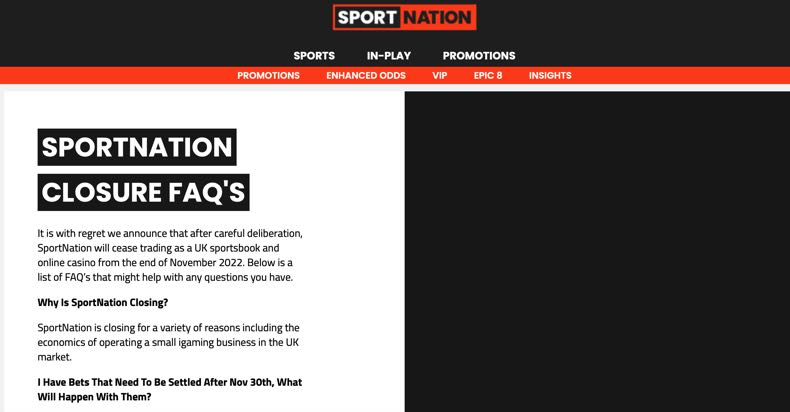 As tends to be the way when a company decides to withdraw from a particular market, they generally do not give too much away nor release any precise financial information. The only explanation provided on their website is that “Sport Nation is closing for a variety of reasons including the economics of operating a small igaming business in the UK market.” So, in other words, they were not getting enough money in via bets placed with them to cover their rising costs.

This is not because Sport Nation was a poor brand – far from it, in fact. There was a lot that their former customers enjoyed about the website. It was a place that had a wide range of markets, competitive odds, exciting offers, a loyalty scheme and standard extras, such as casino games and virtual sports. The trouble is though that a lot of the big names are already doing this, and they can more easily attract new players without spending so much. A smaller brand has to push hard for new acquisitions and this can come at a steep price, one that often does not pay off.

Sport Nation was one of three betting brands operating in the UK covered by a licence held by Swiss-registered company Argyll Entertainment. Argyll themselves were purchased by Esports Entertainment Group in 2020 with Argyll at the time bringing in annual revenues of around £9.7m. Although Argyll could have simply withdrawn Sport Nation from the UK, they opted to completely pull out of the market in November 2022. This meant that Fansbet and the more US-sports focussed Red Zone Sports also joined Sport Nation in withdrawing. So, customers playing at any of these three brands were given a couple of weeks to find a new website at which to place their bets.

What Next for Esports Entertaining Group & Argyll Entertainment?

Esports Entertainment Group (EEG) were keen to stress that pulling Argyll Entertainment out of the UK was not caused by any sort of regulatory breach. They stated that “there have been no adverse judgments imposed by the UKGC against the company”. Indeed, it seemed initially that Fansbet would stick around as they did not announce an upcoming closure when Sport Nation did. The formal announcement that Fansbet would close did eventually follow though, with the timeline for its withdrawal being identical.

Moving forward, EEG, which also owns brands, such as Lucky Dino and Bethard, following acquisitions in 2021, stated in an SEC filing they would focus more on retention rather than acquisition. This will reduce spending on marketing and they have already taken steps in this direction, such as leaving the affiliate site, Oddschecker.

EEG will be hoping this new approach of trying to keep existing customers happy and clawing back those that play less is successful because they are in a precarious financial position. Despite rising revenues, the company defaulted on a debt payment back in May 2022. In the quarterly report, they admitted that there was “substantial doubt about its ability to continue as a going concern for a least one year”. This is why they are so keen to cut costs (which had risen 502% from the same period in the previous year) where they can and removing themselves from the pricey UK market will no doubt help with this. 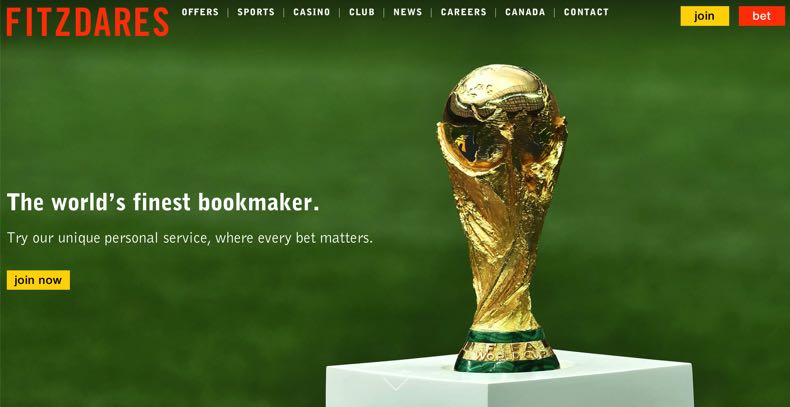 All three brands posted virtually the same closure message on their respective websites as they all followed the same timeline for their market exit. The announcement stated that each brand would continue as normal until November 30th, 2022, accepting all bets prior to this point on both the casino and at their sportsbook. After this date, no more bets would be accepted and any bets on sporting events due to take place later than 30th November would be made void. With the World Cup going on at the time, this no doubt put a premature end to making wagers. Additionally, any bonuses customers had on their accounts expired at the very end of November.

The next key deadline listed is 7th December, this being the deadline for players to request a withdrawal as each website is scheduled to close at this point. Should you just miss this deadline, you can still get your funds by emailing the relevant customer support team e.g. help@sportnation.bet. Customers just need to be mindful that there is obviously a flurry of withdrawals at this time so there may be some delays in getting paid. This is especially true if some form of verification is needed before the funds can be released.

There have been no reported issues with paying customers what they were owed, so as far as exits from a market go, this is as smooth as it gets (based on the current information at least). For players who perhaps forgot they had money in their Sports Nation, Red Zone or Fansbet account, this does not mean that it is lost. EEG said they would attempt to process withdrawals for any account with a balance over £1. Only amounts under this would they be allowed to keep without trying to process a refund. So, if you have played at one of these sites before and ended up with an unexplained payment in your bank account in December, this might be why.

As for where customers go next, as none of the brands has been bought by another company there was no transferring of customer details to another website. Customers of Sport Nation have been encouraged, however, to sign up with Fitzdares as this is one of their recommended brands. In doing so they promoted one of Fitzdares’ welcome offers that sees new players receive a £30 free bet and 20 spins when betting £30.