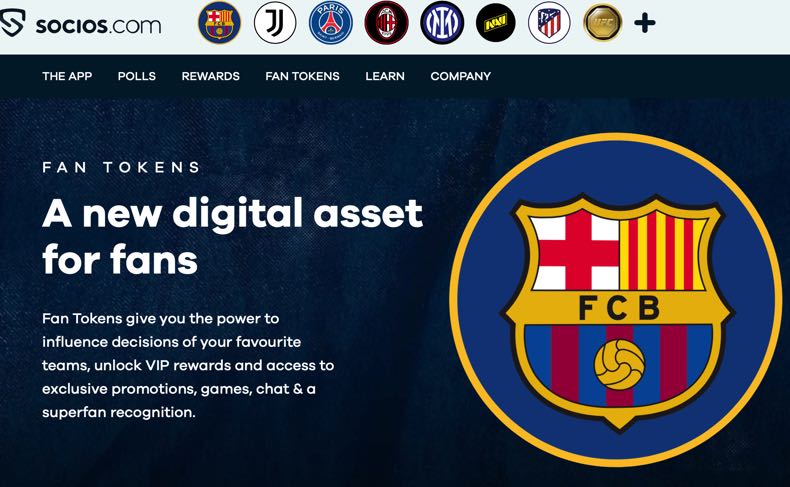 There was a time when teams from the north of England would travel to Wembley for the FA Cup final on a public train, sitting in amongst the fans. On the return journey, players from the victorious club would carry the famous old trophy between carriages, celebrating with fans and perhaps even enjoying a beer or 12. Those players earned a similar wage to their supporters and club owners were millionaires (as in had a net worth of £1m or so) who maybe owned a factory in the town or city. As a thanks, loyal players might even be offered a post-football job in the business!

To say times have changed would be something of an understatement and we now live in an era in which clubs are enterprises and football is no longer a sport, but a business. As in many areas of life, keeping abreast of the latest developments and advances is not always easy and one of the newer additions to the football-business landscape are fan tokens. Here we take a look at what they are and which clubs have got them. And a warning, if you’re over 30, this may all sound a little strange (and quite possibly even if you are under 30 too).

What Are Fan Tokens?

Critics would argue that fan tokens are a way for clubs to earn extra money whilst offering fans very little in return. They are also a way for a third party to cash in on the vast money that exists in modern football and, perhaps most distastefully, they are a way to stealthily market cryptocurrencies (CCs) to a young, impressionable demographic.

The clubs that have embraced such schemes – and the above-mentioned third parties – would, of course, disagree entirely. They would say fan tokens are a way for clubs to earn extra income and gain more engagement (more on that term later) whilst offering the fans a greater say in how their club is run, as well as the chance to win great prizes and play fun games.

We will explain how we feel about fan tokens shortly but first more about what they actually are and how they work. Many sources state that fan tokens are cryptocurrencies and depending on your interpretation this may well be the case, although we feel they are more like pseudo-cryptos underpinned by a genuine cryptocurrency. We’d love for this to be a simple article explained by someone who entirely understands these things but, sadly, there is nobody currently on Earth that does.

Anyway, moving on, fan tokens are fungible (this essentially means exchangeable: if you aren’t familiar with NFTs, or non-fungible tokens, you really need to get out less). By owning them, fans gain access to exclusive competitions, perks and polls, as well as the chance to influence their club. One of the leading facilitators of them, Socios, says: “Fan Tokens are digital assets that represent your ownership of a voting right and give you access to earn unique club-specific rewards and experiences.”

Many clubs have given fans a free token or tokens, rewarding season ticket holders, members and other loyal followers. Generally though, and for any fans that want more tokens, which are sometimes necessary to unlock extra rewards or perks, fan tokens have to be bought using a specific CC. Most fan tokens exist in conjunction with the aforementioned Socios site, which in turn is underpinned by the Chiliz crypto ($CHZ).

In order to “engage”, as proponents of fan tokens are wont to call any and all interaction, fans must download the Socios app. They must then buy enough CC to purchase the fan tokens they wish to own. The fan tokens themselves have a value, usually set in the local currency of the club (although fan tokens are available in other sports such as cricket, motorsports, basketball, MMA and eSports), and this can go up and down. The precise mechanism of how this happens is not entirely clear but relies essentially on supply and demand. The more popular a team and coin prove to be, the higher its price should rise.

Things do not end there though because whilst the fan tokens themselves have a changeable value, in order to realise that value they must be converted into the underlying crypto which itself can go up and down. CCs are notoriously volatile, so whilst you may make a successful pick in terms of which team’s tokens you opt for, if the unpredictable trends that drive the wider crypto markets go against you, you may lose money overall.

The football clubs and those that market fan tokens are at pains to stress that they are not designed or intended to be the same as investing in CC. Discussing $LUFC, the Leeds United fan token, club Managing Director, Angus Kinnear, explicitly said, “It’s not positioned as a cryptocurrency investment”. We will return to this matter but let’s now take a look at the title question of this piece.

What Football Clubs Have Fan Tokens?

As said, it is not just football clubs that have opted to offer fan tokens and nor are Socios the only option. However, in both cases, they are the dominant forces and for the purposes of this feature we are only concerned with football. The following list is, of course, subject to change, with more and more clubs deciding to go down this route all the time and, less typically, some organisations deciding that it isn’t for them after all.

In addition to this huge number of clubs that have already launched their fan tokens, there are many more in the process of doing so. These include several big Premier League sides such as Everton, Arsenal and Aston Villa, as well as 2020-21 Serie A winners Inter Milan. Given the constant need in a capitalist society that is fully embraced by football to keep growing revenue streams, we fully expect more and more clubs to launch fan tokens, either through Socios, independently or through another platform.

Which Fan Tokens Are Worth the Most? 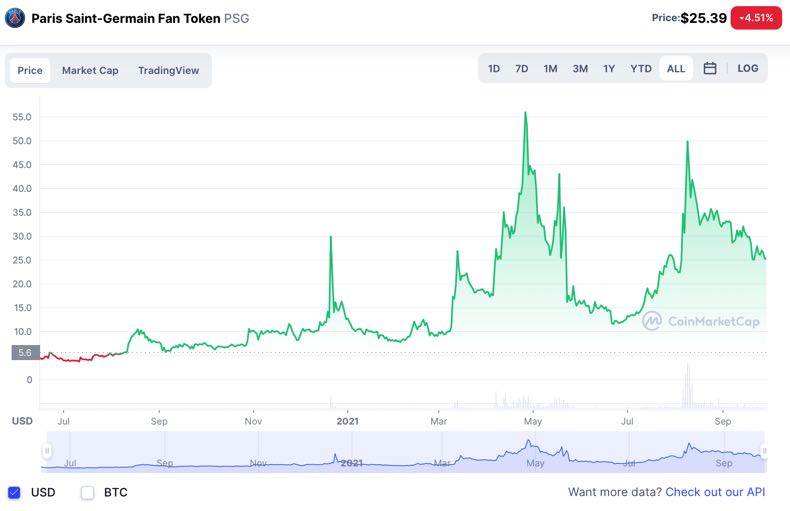 Fan tokens are volatile and with the additional layer of them usually being purchased through the Chiliz CC, there is even more volatility to factor in. This means that prices can change very quickly, so the information here is intended only to give you a broad idea and is a snapshot of the current picture.

Note that prices are taken from the CoinGecko site and were correct as of the 29/9/21. Values are all shown in USD to give a simple and fair comparison between the various coins. Here we show the 10 football club coins with the highest coin value, though total market capitalisation (the value of all the club’s coins in total) varies as not all clubs have issued the same number of coins.

Are Fan Tokens Good for Football? 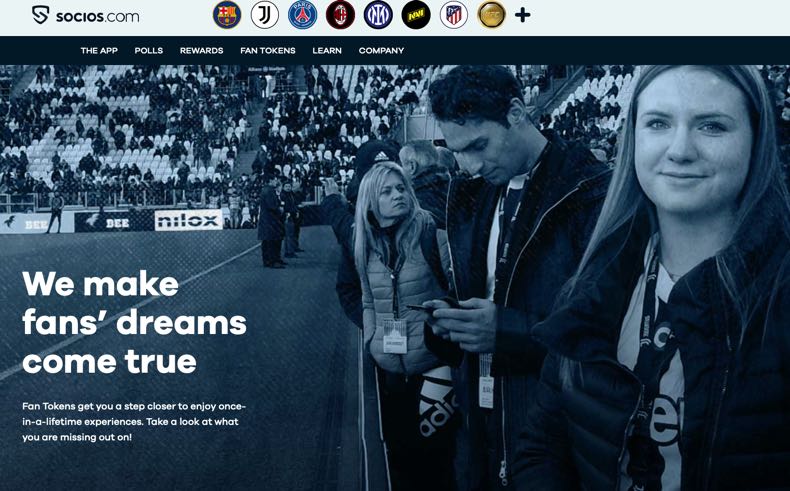 It remains relatively early days when it comes to fan tokens and football and we suspect that the vast majority of football fans haven’t even heard of them yet, let alone bought them. As such, we feel it would be premature to form too strong an opinion at this stage. That said, it is hard to see how they truly benefit the football clubs in a way that could not be done more simply.

Much as football clubs and fan token partners are keen to stress that these schemes are all about fan power and engagement and nothing at all to do with trading CCs, this argument falls flat. In order to get involved with these schemes, it is necessary to buy crypto and when you do so you are met with lots of messages regarding trading and encouraged to give it a try. It is stealth marketing to people who are typically young and not necessarily aware of the very high risks they might be taking on.

A full and fascinating analysis is offered by Leeds United fan site, The Square Ball. Aside from concerns that these tokens are simply ways for third party companies and those with CC interest to advance their own goals, the reality is that the rewards owners of fan tokens receive tend to be incredibly trivial. Moreover, they are not something that could not be offered without the side portion of crypto trading.

According to The Square Ball, “Some of Socios’ more vocal users on social media reckon fans will be picking the team through this app one day.” However, for now, the app tends to be full of out of date offers and perks, many of which the average football fan would have at best a passing interest in. Do you really feel more socially and emotionally invested in your club if you have helped name the third training pitch or decided what colour gloves the goalkeeper wears?

For these are the sorts of “influence” fan tokens yield. You might get to decide what music is played at half time, or what colour the next team bus should be, but if you are expecting to have a say in the next transfer window you are going to be very disappointed! Of course, some fans will enjoy these trivial, possibly fun, fan interventions.

But even if that is the case, once again to quote the insightful Square Ball piece, we do not “see how this process will be helped, or made easier, or made more fun, or more engaging, or produce a better decision, by first requiring (fans) to put money into an app to buy cryptocurrency to buy a fan token to vote.” It helps companies like Socios and it helps anyone who invested in Chiliz when the price was very low but that is about it.

Such schemes could be run directly by clubs, and to an extent, they already are through season ticket benefits and membership structures. This way the club would retain all of the money and there would be no need for fans to be compelled to buy CC or be hit with marketing for such things.

To finish, here’s another quote from our new favourite Leeds fan site, “There might well be a blockchain enabled future for football and football fans, and in other parts of society. Surely this isn’t it.” We will certainly be watching developments closely over the coming months and years.