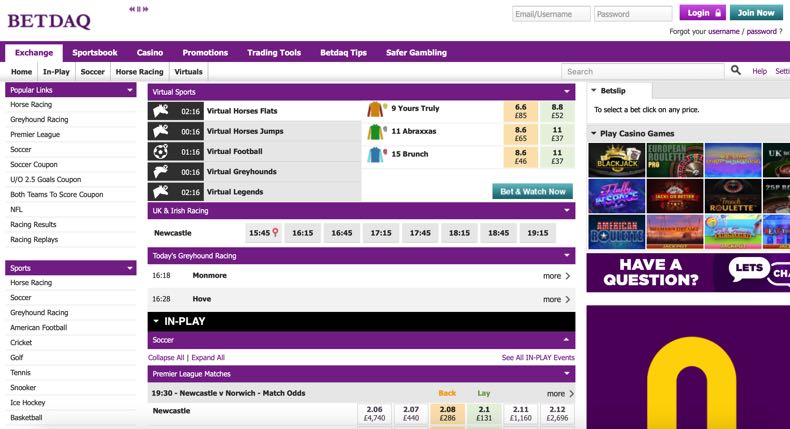 Although there is nothing at all unusual about the ownership of betting brands changing hands, it is very much a rarity for one to be bought back by the previous owner. This is precisely what has happened in the case of Betdaq though after Irish businessman, Dermot Desmond, decided he wanted to be reunited with the betting exchange company he sold just a few years ago. With the deal coming rather out of the blue, we will explore how it came to fruition and what it means for Betdaq customers.

Rather than acting as a more traditional bookmaker, Betdaq primarily serves as a betting exchange, just like their (more popular) rival, Betfair. In betting exchanges, punters bet against each other by backing or laying certain outcomes at mutually agreed odds. With no bookmaker margin built into the odds as a result, many customers believe they get better prices when gambling at an exchange, often with some justification. As for how Betdaq makes its money, they take a commission (usually 2%) on most winning bets. By simply acting as a mediator, Betdaq makes lots of very small profits regardless of the outcome of a particular sporting event.

Betdaq also offer a small range of fixed-odds betting and casino games but it is the exchange that accounts for the overwhelming majority of their revenue. They are the second-largest betting exchange operating in the UK (after the aforementioned Betfair) although the market is more competitive now than it once was.

Who Is Selling Betdaq & Why?

Entain, the parent company of Ladbrokes Coral, purchased Betdaq for a sum of around £25m in 2013. It is quite common for such large bookmakers to buy out smaller brands so this was not seen as anything particularly unusual at the time. It allowed Entain to enter the betting exchange market with some ease as they simply took control of the Betdaq website and all customer accounts. They ensured business largely ran as usual too with customers not really experiencing much in the way of change to their experience.

Eight years on and Entain has agreed to sell Betdaq back to the former owner, Irish financier, Dermot Desmond. The fee is undisclosed but reports indicate it is substantially lower than the £25m initially paid. Given that Betdaq was a profitable company at the time of the deal, you might be wondering why Entain would be willing to take a loss on the brand. Sadly, they did not share the strategic reasons for the decision but we do know that Betdaq was never a core part of their entire operation. It was only ever a side project and one that is now either considered an unwanted distraction or perhaps one which Entain feared would not stay profitable for much longer.

What Does This Mean for the Ladbrokes Exchange?

Although Betdaq always operated as its own independent brand, it did allow Entain to experiment. By this we mean their ownership of Betdaq enabled them to launch the Ladbrokes exchange. This had all the usual Ladbrokes branding and featured on the main website, but all transactions actually took place on the Betdaq platform. The benefit of this approach was that from the off, the ‘Ladbrokes exchange’ was thriving with plenty of money being staked across all kinds of sporting events.

Given that the Ladbrokes exchange was simply Betdaq with a different cover, it comes as no surprise that Ladbrokes has since pulled the service. Although we could still find links on search engines, all efforts to access the Ladbrokes exchange just took us to a dead link. This marks the end of the bookmaker’s dabble in the betting exchange as they will now go back to focussing solely on their core services of fixed odds betting and other gaming products.

Who Is the Man Buying Betdaq?

Dermot Desmond is quite possibly a name you have never heard before but for him, buying Betdaq for a few million pounds is a mere drop in the ocean rather than a big risk. The Irish Independent’s 2019 rich list ranked him as the ninth most valuable person in the country, with a net worth of around €2.1bn. Over the years, the 71 year old has had business ventures in several different areas, purchasing things such as a luxury resort in Barbados and London City Airport. In the case of the latter, he bought the struggling airport for £23.5m in 1995 before selling it for £750m in 2006. It was between these years that Desmond founded Betdaq, with the site going live for trading in September 2001.

The Irishman stayed in charge of the betting exchange brand for 12 years, having established it as the number two brand in the industry. Moving forward it will be interesting to see how much money he is willing to invest into the Betdaq brand. Although fairly out of the public eye now, a few years prior it was a name you saw quite a bit. Not only were they once the main shirt sponsors of Sunderland AFC (2018/19 season) but they sponsored big horse races, such as the Champion Hurdle at Punchestown (2016 to 2019) and the Dee Stakes at Chester (2016).

What Does the Deal Mean for Betdaq Customers?

From the information available at the present time, it means very little to customers of Betdaq. Players will still be able to log in with the same details and use their same balances when the deal comes into effect on 1st December. All details of previous transactions and pending bets will be left untouched too, so there will not be much to notice. Even in the background, customer funds will still receive the same level of protection as they did before, so it is not as though players lose out in this sense either.

As time goes on it is possible the service may change, as things occasionally do when new owners take charge, but with Betdaq still turning a profit, any major overhaul appears unlikely. If Desmond does have any grand plans though, his business record suggests he will probably make a success of things so we’ll keep an eye on the site to see how things develop in the coming months.